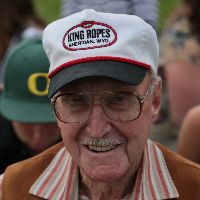 Willy (Willis Wayne) Morris passed away after complications from a stroke on May 13, 2015.He was born on the Morris homestead on Dutch Creek, February 13, 1926, to Ebben and Winnie (Story) Morris. He was the 5th of 8 children.He graduated from Sheridan High School in 1943. As Willy related the story, he could not wait to join the Navy to defend his country and see the world. He was chosen for officer\'s school and purposely flunked the officer\'s test. His commanding officer was aware that he could have easily passed it and threatened him with discharge. He wanted hands on defense of his homeland. He got his wish and served aboard the USS Spangenberg DE-223, chasing German subs from 1944-1946.He returned to Sheridan after the war and worked for Wyoming Automotive in several different towns in Wyoming.On January 10, 1948, He married Barbara Brookins. They made their home in Sheridan and in the spring of 1961, Loren and Dot Butler and Willy and Barbara Morris opened the original NAPA Auto Parts Store on Grinnell in Sheridan. Willie and Barbara divorced in 1965.Willy maried Ruth (Shaffer) Green on November 25, 1965. They continued with the business until Willy\'s retirement in 1991. He had a great love for his community, as shown by his dedication to the YMCA, WYO Theater, Sheridan Senior Center, Elk\'s Lodge, American Legion and others. Being chosen to participate in the Honor Flight to Washington D.C. For WW II veterans was what he called, “A once-in-a-lifetime deal.”Ruth and Willy\'s retirement consisted of winters in their home in Mesa, AZ, and summers in Sheridan, where they spent every opportunity they could to be in the Big Horn Mountains that were a part of Willy\'s soul.Willy was preceded in death by his parents, six brothers and one sister. Survivors include his wife, Ruth; one sister-in-law, Nina Morris of Mesa, AZ; and several nieces and nephews. Marcia (Dallas) Mitchell-four grandchildren, six great-children and one great-great grandson; Scot Morris-twograndson and 3 great-grandsons; Sherrie (Jim) Harries- three granchildren and five great-grandchildren; Ray (Laurie) Green-two grandsons and one great-granddaughter; Rick Green-two grandchildren and two great-grandsons; and Jaci Hicks.Willy\'s wishes were to have no formal funeral of any type but to have his ashes spread on a favorite bluff in the Big Horns.Memorials in his name may be made to the YMCA, 417 N. Jefferson Street, Sheridan, WY, 82801.A Memorial reception will be planned at a later date.Kane Funeral Home has been entrusted with arrangements.