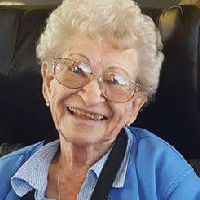 View Service FolderWilliscene “Billie” Lou Bethurem, 86, of Sheridan, passed away on Saturday, November 11, 2017, following a brief intense battle with cancer at the Sheridan Memorial Hospital. Billie was born in Sheridan on April 21, 1931, to Lester and Hilda (McPherson) Johnson, as one of nine siblings. Billie called Sheridan home her entire life, save for a brief time in California on a Naval Base, shortly after her marriage.Billie graduated from Sheridan High in 1949, and enjoyed helping on class reunions for the “49er\'s.” Billie married her one true love, Arnold “Fay” Bethurem, in Sheridan, on November 16, 1950, after a love at first sight courtship while he was home on leave. Upon returning home to Sheridan after Fay\'s stint in the Navy, they went to live and work on the family ranch. She went to work for Mountain Bell, later to become Qwest, from which she retired in 1990. Billie is survived by her sister, Virginia “Ginny” (Marvin) Horner, brothers-in-law Fred Verley and Conrad Bethurem, sister-in-law, Ruth Johnson, her three children, Kip (Shirley), Keri, Konni (Randy) Bethurem - Mitchell, her five grandchildren, Kolter Bethurem, Cruz Bethurem, Hannah (Chris) Ryan, Ryan (Leah) Motes, and Aaron Mitchell, plus her three beloved great grandchildren, Hunter, Zoey and Carter Fay Ryan. In addition to numerous nieces and nephews. She was preceded in death by her parents, three brothers, and four sisters, her beloved husband, Fay and grandson, Cyrus.Billie enjoyed her cross word puzzles, reading, knitting, baking for family and friends, rides to the mountains, and occasionally playing the games in Hardin and Billings. She loved spending time fishing and traveling with Fay when he was alive. She was a member of the Big Horn Mountain Eagles Auxiliary, Shrine Stagettes for the Oriental Band and member at large of Beta Sigma Phi.Services will be held at 3:00 pm on Thursday, November 16, 2017, at Kane Funeral Home with Pastor Paul Hayden officiating. A reception will follow at the Eagles on Commercial Drive.In lieu of flowers, Memorials to honor Billie may be made to the Disabled American Veterans, P.O. Box 14301, Cincinnati, OH 45250-03001.Kane Funeral Home has been entrusted with arrangements.