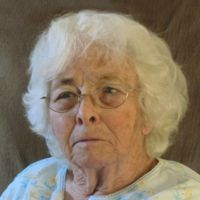 Arlene M. Hoff, 84, of Williston, ND and formerly of Sheridan WY died Wednesday, March 5, 2014 at Mercy Medical Center in Williston.Arlene M. Loucks was born April 13, 1929 in Orange, CA to Harry and Edyth (Hammontree) Loucks. She attendedthe Sheridan, WY School system and graduated from Sheridan High School in 1947. She married C. Glenn Hoff on October 22, 1948 in Sheridan, WY, where they lived for over 70 years until Glenn’s passing on August 23, 2001.Arlene loved cooking and spent some of her early years as a cook on a ranch in New Castle, WY. After her marriage, she worked at the Mills Paper Co. in Sheridan, WY, but retired to raise 3 children. She enjoyed roller-skating and with her husband, ran the Sheridan Community roller rink for many years. She loved horseback riding, camping, fishing, crocheting, knitting, sewing, quilting and attending Bible Study with her church.To Mrs. Hoff, life was one big adventure. Older age did not stop her quest to try new things. In her early 70\'s, Arlene went to see Disney World and then Pearl Harbor for the first time with her daughter. In her late 70\'s, she was given the opportunity to fly in a bi-plane and even though she had had a stroke and needed to be picked up and put in the plane, she had her first bi-plane ride. When in her 80\'s, White Dog Development Group gave Arlene the opportunity to ride in a helicopter for the first time, she waited until a 4-wheel drive picked her up, took her to the helicopter in a nearby field, and she had her first helicopter ride.Arlene was a Past President for Beaceant, Past Worthy Matron of Friendship Chapter #51 O.E.S., and member of Threaders Creative Fiber Guild in Sheridan, Wyoming.She was preceded in death by her parents, her husband, Glenn Hoff, son-in-law Jim Westwang, 2 grandsons, Denton Hoff and Eric Westwang; and 1 step-grandson, Michael Higley. Survivors include a son, Wayne Hoff of Sheridan; two daughters, Linda Westwang of Sheridan, and Laurie Bartenhagen (Dave) of Williston, ND; 8 grandchildren and 5 great-grandchildren whom she adored; and a brother, Duane Loucks.A Graveside Service will be held in the New Masonic #43 Section of the Sheridan Municipal Cemetery on Friday, March 14, 2014, at 10:00 a.m with Pastor Don Derryberry officiating. A Reception will follow at the First United Methodist Church.Memorials may be sent to: Wounded Warrior Project, PO BOX 758517, Topeka, KS 66675.Kane Funeral Home has been entrusted with local arrangements.