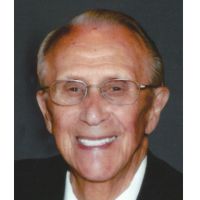 Arnold (Arnie) E. Herrboldt was born on March 23, 1924 to Edwin and Olga (Huber) Herrboldt, in Hosmer, SD where he was baptized and confirmed at St. John\'s Lutheran Church. Arnie graduated from Hosmer High School in 1942 then attended the University of Minnesota before being drafted into the army October 1943. He served in the infantry during WWII in central Europe and was honorably discharged in January 1946 as a Sergeant Major. Arnie took great pride in serving his country and certainly remembered his participation in the invasion of Normandy Beach.In 1950 Arnie graduated from the University of South Dakota. During his college years he enjoyed playing the saxophone with dance bands.He married Arlene Mehlhoff on September 3, 1950 and lived in Billings, MT for one year where he was employed with Grinnell Company of the Pacific. The failing health of his father prompted them to move back to their home town where Arnie became a partner in the family implement business, A. Herrboldt & Co.The 50th anniversary of the company was celebrated on April 14, 1969, at which time the company was given a Senior Dealer Award for the years of continuous representation of agricultural equipment. Arnie then added a showroom to the building for selling stereos, TV\'s, washers, dryers, ranges, and lawn mowers. Arnie & Arlene purchased the business in 1984. It flourished as a repair shop until Arnie retired on September 6, 2003. Arnie and Arlene continued their travels and managed to visit all 50 states, all Canadian provinces and many foreign countries.During his retirement Arnie loved to work in his yard. Some of his past pursuance\'s include: president & secretary of the Hosmer Civic Club, school board member, St. John\'s Lutheran Church council president, Sunday School superintendent, church choir member, American Legion Adjutant and Commander, GOP state delegate and committeeman, and a member of the VFW and American Legion.Due to ill health, they moved to Sheridan, WY in July 2011. Arnie then passed on March 31, 2014 at the Veterans Home in Sheridan.He is survived by: his wife, Arlene, of Sheridan, WY; daughters: Paulette (Nyle) Wollenhaupt of Newton, KS, Sydney Herrboldt (Tim Howell) of Tucson, AZ and Tamara Kramer (Gary) of Buffalo, WY; sisters, Irma Herrboldt of Buffalo, WY and Lora Holzworth of Edina, MN; one brother, Gordon of Richfield, MN; grandchildren; Sarah Wollenhaupt (Carl) of Burnsville, MN; Grant(Allison) Wollenhaupt, of Kansas City, MO; Rachel Kramer of Sioux Falls, SD; and Kevin Kramer, of Laramie, WY; and three great-grandchildren.Arnie was preceded in death by a daughter, Michelle, his parents, and his sister, Verna.A full military service will be held on Memorial Day in Hosmer, SD.Kane Funeral Home has been entrusted with arrangements.