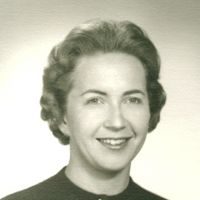 Barbara E. Cloyd Hurst, age 84, passed away at Green House Living of Sheridan Saturday evening with the loving support of family and a close friend. Barbara was born January 15, 1931 to Clinton and Bertha Eubank in Denver, Co. Raised in Sheridan, she graduated from Sheridan High School in 1948. Barbara was a member of the first graduating class at Sheridan College where she met Richard P. Cloyd. Richard (Dick) moved with his folks to San Diego, CA and sent for Barbara. They married in 1950 and in the next several years had two children.Barbara returned to college after their children were in school, completing her degree at San Diego State University in education in 1963. She began teaching junior high under the leadership of Al (Bud) Bowman, formerly of Sheridan. Barbara taught a wide range of subjects brilliantly, especially enjoying home economics. She returned to SDSU in 1974 to complete her masters in counseling focusing on the development of the middle school concept. Barbara was highly respected and dearly loved by students, parents and peers. She was known for rescuing students from teachers who’d “had it with them”, switching schedules and absorbing the wrath of frustrated teachers. She clearly looked out for the underdog. Often time teenagers could count on the Cloyd family home as a place to stay for a night or an extended period of time.Barbara had a variety of hobbies, amongst them music, dancing, cooking, baking and sewing. She was known for her scrumptious pies. On late nights and weekends, Barbara was often found at her sewing machine creating anything from simple curtains to elaborate prom dresses for her daughter and friends.Dick Cloyd died in 1986. Several years later Barbara attended her 40th class reunion in Sheridan and reunited with Thomas K. Hurst. She retired after 30 years in education to leave San Diego and return to Sheridan to marry Tom. Tom and Barbara made wonderful memories together, first in Story, then at the Powder Horn and lastly in town. Barbara made friends easily throughout her life. She was involved in many activities in Sheridan, still looking out for kids or folks in need of guidance. When she became a resident at Green House Living she continued her generous and sweet smiling spirit. Her daughter Cheryle and dear friend Laurel Rogers doted on her and kept her spirits lifted with music, dancing and car rides.Barbara was preceded in death by her parents, her brother Richard C. Eubank, and her first husband Richard P. Cloyd. She is survived by her husband Thomas K. Hurst, his son Tommy, and grandson Nicholas, her son Roger P. Cloyd (Kathlyn Ignacio), grandsons Chase, Rocky and Carson, her daughter Cheryle E. Guth (Guy Fowler) and grandson Thomas. Barbara has two great grandchildren, Reiana and Jonathan Guth.A quote from long-time friend MaeDean Reed; “If I were asked to do a eulogy for Barbara I would say that she was the most giving person I have ever known.”There will be no formal service. Barbara will be interred at St. Peter’s Episcopal Church. In lieu of flowers please play your favorite music and have one last dance for my Mom.Contributions may be made to a charity of choice or the Senior Center at 211 Smith Street, Sheridan, WY 82801, where Barbara and Tom delivered meals for many years, or Green House Living of Sheridan – Activity Fund specifically at 2311 Shirley Cove, Sheridan, WY 82801.Kane Funeral Home has been entrusted with arrangements.