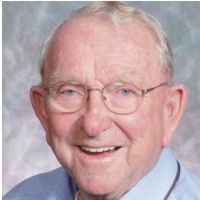 Dale Eugene (Gene) Rexroat, 88, of Sheridan, passed away on Friday, September 5, 2014 at his home.Gene was born on January 5, 1926 to Dale and Alta (Shores) Rexroat in Ogden, UT. The family moved to Sheridan, WY when Gene was 12 years old. Gene went to school in Sheridan. In 1944 he was drafted into the Army and served in Italy in WWII. He was discharged from the service in 1946. After returning to Sheridan from the war, he was married to Patricia Ruth Bertie in 1950. Following Patricia’s death in 2002, Gene married Sondra Badget in 2005. In 1953 he went to work at the Ash Creek Oil Field where he worked until his retirement. Gene served the youth of the Sheridan community as a Boy Scout Master and as an instructor at the Big Horn Mountain Jr. Gun Club. Gene enjoyed hunting, fishing, woodworking and traveling.Gene was a member of the Holy Trinity Catholic Anglican Church and was a life time member of the NRA. He was also a member of the Elks, Masonic Lodge Big Horn Mtn. Lodge 43, Sheridan York Rite Body, and the Kalif Shrine.Gene was preceded in death by his parents, his first wife, Patricia, and two sisters. He is survived by his wife, Sondra Rexroat of Sheridan, his sons; Mark Rexroat of Sheridan, WY, Bruce (Dori) Rexroat of Wyarno, WY, Scott (Linda) Rexroat of Gillette, WY, Kirk (Holly) Rexroat of Banner, WY, and his brother Richard (Effie) Rexroat of Sheridan, WY. Also by his grandchildren; Samantha (Nick) Knesebeck of Sheridan, WY, Toni Rexroat of Cheyenne, WY, Josie (Scott) Jordan of Gillette, WY, Kalob Rexroat of Sheridan, WY and four great grandchildren; Miranda, Nadine, Hallie and Ramiee.In lieu of flowers, memorials to honor Gene can be made to the Kalif Shriner\'s Hospital Travel Fund, PO Box K, Sheridan, WY 82801 or to the Hospice of the Big Horns, PO Box 391, Sheridan, WY 82801.A Service will be held at 10:00 a.m. on Friday, September 12, 2014, at the Masonic Temple, 109 S. Gould St., Sheridan, WY. A reception will follow. Inurnment will follow at later date.Kane Funeral Home has been entrusted with arrangements.