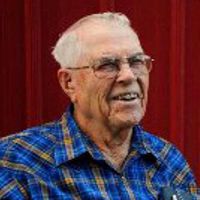 David N. Holwell, age 94, passed away on September 14th at the VA Mountain View Living Center. He was born to David N. and Harriet (Cooksey) Holwell on November 4, 1920, at their ranch on Skull Creek in Weston County, the 7th of 9 children. He grew up on the ranch, attending local schools and eventually enlisting in the Army Air Corps, where he served from 1942 to 1945, as an airplane crew chief in the European theater and was honorably discharged as a Tech Sergeant. He returned to the ranch where he lived for the next 50 years before moving to Upton where he lived for the next 19 years. He also worked for the City of Newcastle and Townsend Oil Company.He married the love of his life, Kathryn Thompson in Sheridan on September 8, 1943, and they raised five children on the family ranch. David was involved with his community serving 33 years as a 4-H leader and he was the sheep superintendent at the Weston County Fair for many years. He was a member of the Farm Bureau for 75 years and taught hunter safety for 45 years. He was a member of Newcastle Lodge No. 13 A.F. & A. M. for 69 years and also a member of Upton Lodge No. 38 A.F. & A. M. and Kalif Shrine.David enjoyed woodworking, playing cards and games with his children, grandchildren and great-grandchildren, playing the guitar and singing with Al’s gang as they entertained at Weston Manor. He also loved going to coffee in Upton with his many friends.He is survived by his wife of 72 years, Kathryn and his children Michlene Mankin of Spearfish, SD; Janice (J.C.) Stimpson of St. Anthony, ID; Rodney (Linda) of Sheridan; Alene (Larry) Childs of Trinidad, CO and Wanda (Scott) Orchard of Dayton, WY. His grandchildren, Kirk Holwell (Robin) of Longmont, CO; Ronda Holwell of Sheridan, WY; Marcia (Jeff) McGee of Soldotna, AK; Wyatt Childs (Christina) of Victoria, TX; Tell Childs of Trinidad, CO; Desiree’ Orchard of Steamboat Springs, CO; and Andrew Orchard (Meghan) of Littleton, CO. He also had 10 great-grandchildren. He also survived by his brother, Robert (Pat) of Lincoln, NE. He was preceded in death by his parents and his brothers Harland, Merle, Bill and Mervin and sisters, Mary Carter, Marguerite Spute and Ruth Croxton.Services are scheduled for Friday, September 25th at the Upton Community Center at 11:00 am with a private scattering of the ashes at the ranch at a later date. In lieu of flowers a memorial has been established to the Shriner’s Hospital for Crippled Children or the Upton Ambulance Fund.Kane Funeral Home has been entrusted with arrangements.