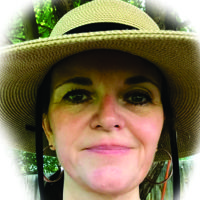 Deanna Kay Martinez, age 48, of Sheridan, passed away on Friday, August 31, 2018, at the Billings Clinic in Billings, MT after a battle with colon cancer. De was born in Sheridan, WY to Judith and John Dahlin on June 28th, 1970.  She had 3 siblings Mike, Jeri, and Melissa.At the age of 15 she met her soulmate and life partner, Randolph Martinez (Marty).  They were married on July 2, 1988, in Sheridan, WY. DeDe had many jobs over the years (including A&K construction, in-home daycare, the Sheridan Police Department, and Volunteers of America), but her favorite one, and life’s-calling was homemaker and mother to her five children, John Austin, Logan David, Shelby Lynn, Lukas James, and Spencer Mathew.  She was their first friend, teacher, and best advocate.DeDe enjoyed camping, sewing, crocheting, beading, gardening, but most of all spending time with her children and grandchildren.DeDe was preceded in death by her parents John and Judith Dahlin. Her legacy lives on through by her husband Marty, and five children and their spouses, John (Kelsi), Logan, Shelby, Luke (Dani), and Spencer; as well as her three siblings, Mike and Trisha Dahlin and their children T’Leye, Taylor and Jett; Jeri and son Robbie Barnett; and Melissa and Steven their children John and Lillie.A Visitation will be held at 6:00 with a Rosary at 6:30 on Friday, September 7, 2018, at Kane Funeral Home. Mass of the Christian Burial will be held at 2:00 on Saturday, September 8, 2018, at Holy Name Church with Father Clark Lenz officiating. Burial will be held in the Sheridan Municipal Cemetery with a reception to follow in the Parish Hall.In lieu of flowers memorials to honor DeDe may be made to Holy Name Catholic School, 121 S. Connor St., Sheridan, WY 82801.Kane Funeral Home has been entrusted with arrangements.