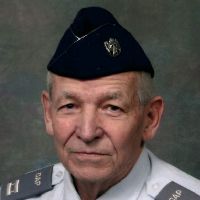 Dee J. Sadler, 77, of Sheridan, passed away on Thursday, January 21, 2016, at the Billings Clinic. Dee Jay was born in California on March 27, 1938, to Robert and Georgia (Stevens) Sadler. After 40 years of service with the National Guard, Dee Jay retired as a Sergeant and became a Civil Air Patrol Senior Member.  He was a well-respected mentor to many Civil Air Patrol Cadets, always encouraging them to do their best, not only within the organization, but in every aspect of their lives. Dee Jay worked at Rocky Mountain Sports for 7 years. He enjoyed spending time with the customers and friends at work. His hobbies included flying airplanes, riding motorcycles and guns. On July 22, 2013, Dee Jay married Dawn Shepard, with his beloved Cadets standing at his side. Dee Jay is survived by his wife and his Civil Air Patrol family. He is preceded in death by his mother, father and daughter, Celeste Robin Nye. A Visitation will be held from 2:00 to 4:00 pm on Wednesday, February 3, 2016, at Kane Funeral Home. Services will be held at 2:00 pm on Thursday, February 4, 2016, at Kane Funeral Home with Pastor Jim Coonis officiating. A Pot Luck Reception will follow at the Mountain View Fellowship Baptist Church at 54 W. 8th St., Sheridan.In lieu of flowers, memorial donations may be given to the Sheridan Civil Air Patrol at PO Box 6235, Sheridan, WY 82801.Online condolences may be written at www.kanefuneral.com.Kane Funeral Home has been entrusted with arrangements.