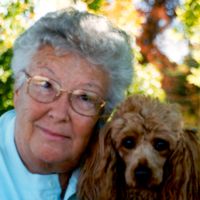 Dixie M Gillis passed away peacefully May 24 at her daughter\'s home in Helena , Montana. She was born May 13, 1931, to Charles and Genevieve Dyll in Helena. She graduated from Sheridan High school in 1949 in Sheridan, Wyoming where she met the love of her life David B. Gillis. They were married on October 10, 1952 and they had three wonderful children. They were married twenty nine years before Dave\'s passing in 1981.Dixie attended nursing school at Carroll College in Helena and graduated as a registered nurse in 1952. She started her nursing career at the \"old Memorial Hospital\" and then worked at the current Sheridan Memorial Hospital until 1963. In 1956 Dixie, Dave and his father , Jim , bought a ranch on Wolf Creek affectionately known as \"The Needmore Farm\". Dixie\'s nursing skills were put to good use raising sheep, much to the chagrin of the local cattle ranchers.Dixie was a passionate reader, was known for her wonderful garden, and loved to crochet and knit. Anyone stopping by the house was always welcomed with a hot pot of coffee and a jar full of cookies . She taught her love of cooking and baking to her daughters and her granddaughter. If anyone ever left the place hungry, it was by their choice.After Dave\'s passing in 1981 she resumed her nursing career at Eventide, where she worked until she retired in the 1990s. In her retirement she enjoyed a trip to Hawaii and loved swimming often at the warm springs in Thermopolis. She enjoyed the companionship of good books with her poodles by her side. Dixie enjoyed her independent living out at the ranch until 2010 when she returned to her roots in Helena,living with her daughter Kellie until her passing.Dixie was preceded in death by her parents and her brother, Leo. She is survived by her three children, Kellie (Owen) LaFave of Helena, Kip (Marcia) Gillis of Wolf, Kim Smith of Sheridan , grandchildren, Heather (Jess) Maslowski of Ranchester , Ryan (Vaida) Gillis of Sheridan and great grandchildren Carter and Lily Maslowski and Mickey Gillis.She is also survived by her step grandchildren Shawna, and Mark (Jani) and great grandchildren Katie and Ashlyn.Cremation has taken place and the family will have a private internment at a later date.In lieu of flowers donations can be made to the Tongue River Branch Library at 145 Coffeen, Ranchester, WY 82839 or donor\'s choice.Kane Funeral Home has been entrusted with arrangements.

Date:
Start Time:
Cremation has taken place and the family will have a private internment at a later date.
Location:
Service VideoService Brochure