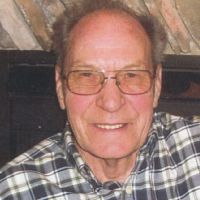 Donald R. Koski, 82, of Sheridan passed away on Saturday, December 2, 2017 at his home. He was born on October 5, 1935, to Arvo Nestor and Mary Alina (Jernberg) Koski in Lead, South Dakota.Donald was a Veteran and served in the US Army from 1958 to 1960 in Germany. He worked at the VA hospital in Sheridan, WY, for nine years. He was a machinist and worked for thirty years in Minnesota at White Motor, Rahr Malting and Eaton Charlyn. He enjoyed hunting, fishing, and anything that had to do with automobiles, old or new.Donald was a member of the Old Apostolic Lutheran Church. Most of his life was spent in Minnesota. He moved to Sheridan, WY, in March of 1995.Donald was married for twenty one years to Marlene Ann Stalvik, who was killed in a tragic accident on December 12, 1983.  They had five children; Donald R. (Sheri) Koski JR of Bellevue, NE, Melanie A. Komm of Sheridan, WY, Douglas J. (Sharla) Koski of Brownton, MN, Melinda K. (Jens) Thorsen of Shakopee, MN and Melissa L. (Jim) Foley of Watkins, MN. There are fifteen grandchildren and ten great grandchildren. He leaves four siblings; Tom (Anna Mae) Koski of Sundance, WY, brother in law, Lance Wilen of Lake Nordon, SD, Norma (Herschell) Hoffman, of Belle Fourche, SD, Ann (Steve) Kenoyer of Rapid City, SD, and Clarence “Willie” (Vicki) Koski of Whitewood, SD.Donald was married to Gaye Koski for thirty three years. She had four children from a previous marriage; Melody (Hans) Redinger of Sheridan, WY, Philip (Sonia) Willett of Sheridan, WY, David (Shari) Willett of Sheridan, WY, and Heidi Anderson of Sheridan, WY. There are twenty three grandchildren and thirteen great grandchildren from the Willett side. Don will be missed by multiple nieces, nephews, relatives and friends.Don was preceded in death by his parents, first wife, two sisters, Darlene and Barbara.A visitation will be held from 5 to 7 pm at the Old Apostolic Lutheran Church on 111 Metz Road,  with the Funeral Service to follow at 7:00 pm on Tuesday, December 5, 2017.A Viewing will be held at 10:00 am at Berta\'s Funeral Home in Chaska, MN on Friday, December 8, 2017.Burial will follow at noon at the Mt. Pleasant Cemetery, in  Chaska, MN with Military Honors.Memorials to honor Donald can be made to the Old Apostolic Lutheran Church, 111 Metz Road,Sheridan, WY 82801.Kane Funeral Home has been entrusted with arrangements.