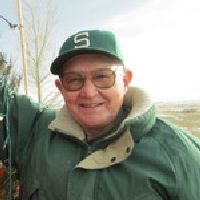 Dr. William John Novotny, Jr., O.D., passed away Sunday, November 19, 2017, at his home in Buffalo, Wyoming surrounded by his family. He was 70 and waged a valiant battle against cancer.Bill was born January 22, 1947, in Riverton, Wyoming, the eldest son of William Sr. and Beulah (Stork) Novotny. He grew up and was educated in Riverton where he developed a love for the outdoors and the Wind River Mountains. A tenacious athlete, Novotny was a standout football player and held numerous records for the Wolverines.  Novotny attended the University of Wyoming where he was a member of the Sigma Nu fraternity. At UW, Bill met the love of his life, Marilyn Pierson. They were married in June 9, 1968, and recently celebrated their 49th wedding anniversary. Bill and Marilyn moved to Forest Grove, Oregon, where Bill earned his doctorate in optometry from Pacific University and Marilyn put him through school working for the Forest Grove School District. At Pacific, Novotny was president of the optometric fraternity. Dr. Novotny opened the first full-time optometric practice in Buffalo in 1972, becoming a fellow of the American Academy of Optometry in 1977, and served the local community there until he retired in 2006. He earned the moniker of “Doc Novot” and it stayed with him until his death.Novotny served as a trustee for the Lake DeSmet Conservation District and was a past president of the Buffalo Rotary Club, Buffalo Trap and Skeet Club, the Buffalo Outlaw Wrestling Club and the Johnson County Youth Camp Board. He coached his children in various sports and volunteered his time with 4-H and FFA. Novotny was a past president of the Wyoming Opometric Association.Bill was a gifted craftsmen who enjoyed woodworking, fly tying, welding, and taxidermy. He had a passion for restoring sheep wagons, carriages and boat building. A self-taught geologist, and avid rock hound, Novotny loved to search for arrowheads and artifacts. He shared his passion for the outdoors with his friends, children and grandchildren. He was especially fond of antelope hunting and fly fishing. He loved spending time at the family cabin in Dubois. Doc was a devoted husband, father, grandfather and friend.He is survived by his wife, Marilyn; his children Nicole (Richard) Wonka, Tiffany, and Bill, III; his son-in-law Richard Wonka; his grandsons John, Charles and Thomas; his beloved dog Shadow; an Aunt, Inge Stork; two cousins; two sisters and three sisters-in-law, numerous nieces; nephews and extended family and loving friends. He was preceded in death by his father, mother, mother-in-law, and two younger brothers.  A Celebration of Life will be held at 11:00 am on Saturday, November 25, 2017, at the Big Horn Baptist Church in Buffalo with Bishop Vernon Strickland officiating. A reception will follow in the Community Building at the Johnson County Fairgrounds.Memorials to honor Dr. Novotny may be made to the Susie Bowling Lawrence Hospice at 497 West Lott, Buffalo, WY 82834 or the Johnson Youth Camp, 76 N. Main St., Buffalo, WY 82834.Kane Funeral Home has been entrusted with arrangements.