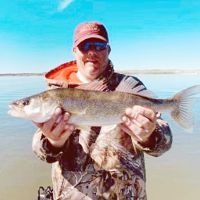 October 28, 1969 - February 11, 2021Edward Michael Yalowizer passed away February 11 at Wyoming Medical Center in Casper of stroke related complications. Eddie was born October 28, 1969 in Brainard, Minnesota to Michael Yalowizer
and Barbara Rauchbauer. The family moved to Wyoming before Ed was one year old. He attended Tongue River Schools and graduated from Sheridan high school in 1989.
After graduation Ed worked for the railroad for 10 years. He then went into construction running heavy equipment which he enjoyed. His other enjoyment was working in the meat shop with his Dad during game season.
Eddie’s first love was baseball, and he was an incredibly talented ball player. He spent many summers on the field and played legion baseball with his lifelong best friend Alden Donston. He and his grandma Betty were the Minnesota Twins biggest fans. Eddie was an avid pheasant hunter and thoroughly enjoyed the hours spent hunting with his beloved dog Cinder. His other great love was walleye fishing and he and his stepmom were great fishing buddies. Much to the dismay of his Dad who would have liked to have been done for the day, they often wanted to stay on the lake even if the fish weren’t biting. Ed would often say “oh, oh Dad’s sighing again.”
He loved his family and although they did not live close, Eddie made sure he visited his mom, sister and nieces in many of their military locations. He saw the National Mall and hockey games in Washington DC and the Gulf of Mexico and Disney World in FL. He loved to brag on his Godchild Faith’s big brain and never doubted the success she worked so hard for….and he attended major dance performances of his little Hopie, from Virginia to Laramie, Wyoming to Tampa.
Eddie had a great personality and an infectious smile and laugh. He was big-hearted and would be the first one to help someone in need. He never missed sending cards and phone calls for Valentine’s day, birthdays or any other special occasion (promotions and retirement) to his mom and sister.
He was preceded in death by his grandparents, Henry and Shirley Yalowizer, and Frank Rauchbauer and Betty Kelly, several cousins, and a stepbrother. He is survived by his father and stepmother, Michael and Bonnie Yalowizer; his mother Barbara Rauchbauer; his sister and brother-in-law Charity and Gary Hartley; his nieces Faith and Hope Hartley; stepbrothers Ian and Devon Oswald; stepsisters Kiki Farrar (Todd), and Megan Hobart (Joe); nieces; aunts, uncles and cousins.
A celebration of life will be held July 15, 2021 at Kane Funeral Home, at 11:00 with Father Glenn officiating with a reception at the Knights Of Columbus

.Ed was loved and will be missed by all.
In lieu of flowers and as a tribute to Ed’s love of animals the family requests that donations be made to the Dog and Cat Shelter, 84 E. Ridge Road, Sheridan or the charity of the donor’s choice.