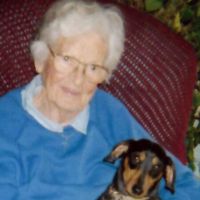 Elizabeth Ann Iames passed away at Westview Nusring Center on Tuesday September 10, 2013. Graveside services will be in her hometown of Glenrock, Wy on Tuesday, September 17, 2013.Elizabeth was born on May 10, 1922 in Casper, WY to B.C. and Anna Nelms. She was born prematurely and her incubator a shoe box in the oven. She was an only child, so her companions were horses, dogs, parrots, and various other ranch animals. She was proud that her dad worked as a chauffeur for Governor Cary. She grew up on the Governor’s ranch between Glenrock and Douglas. Liz attended grade school in a one room school house at Careyhurst. She rode her horse to and from school and later graduated from Glenrock High School at 16. She loved her first job at the Douglas courthouse where she worked until she married Melvin Iames on June 6, 1949. Melvin (Stub) and Liz lived in Glenrock all their married lives. She was a homemaker and book keeper as they raised their two boys Rick and Ron. She was devoted to the Episcopal Church and the Deer Creek Homemakers Club. She loved to travel and remembered with great joy her trips to Hawaii and Alaska. Liz was a great arrow head hunter and fish noodle-catching fish with your hands. Dachshund dogs were her favorite and she usually had one in her bed.She was preceded in death by her husband Stub and son Rick Iames. She survived by her son Ron, (Margo)of Dayton, grandsons Matt (Nicole and Adrianna) New York and Ronnie (Jessica and Natalie) Sheridan.Graveside Services will be held on Tuesday, September 17th, 2013 at the Glenrock Cemetery.Memorials may be made to the Glenrock Senior Center, 815 West Deer, Glenrock, WY