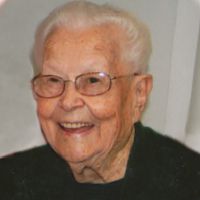 Ella Loretta (Belden) Massie, known to many as “Pat,” or “Grandma Massie,” passed away on March 4, 2014. She was ninety-nine years old.Ella was born in Bridgeport, Nebraska, to John Orlando and Lavina Ann (Judd) Belden on February 4, 1915. She was preceded in death by her twelve siblings.Ella graduated from Sundance High School at the age of 16, attended Normal School in Spearfish, SD, and later taught in a one-room schoolhouse.She married Robert Rodney Massie on June 9, 1934. They lived in the Aladdin, WY area and later moved to Battle Ground, WA. They lived in Washington for 45 years and moved to Sheridan, WY in the spring of 1984.Her many children and grandchildren were Grandma’s greatest loves. Her legacy included more than one hundred fifth-generation descendants. When asked if she had a favorite, she would say with a smile, “Whoever I am holding in my arms!”Ella was active all her life, enjoying her large family and many friends. She loved teaching, and was a Foster Grandparent into her nineties. She and Robert came into living faith in their early twenties and were members of the Old Apostolic Lutheran Church.During their 64 years of marriage, they had seven children: Jack (Lola) Massie, Battle Ground, WA; Cliff – deceased (Lois) Massie, Kenai, AK; Grace (Paul) Redinger, Spearfish, SD; Wally (Helen) Massie,Brush Prairie, WA; Rod (Twila) Massie, Davenport, WA; Randy (Denise) Massie, New Town, ND; and Loretta (Randy) Lindberg, Sheridan, WY.Grandma was preceded in death by her husband, as well as her son Cliff,  three daughter in laws Lois, Gayle and Nancy Massie, and an infant daughter. She leaves many hundreds of friends and family members who will miss her quick smile and sweet nature. She will be remembered with love for the Christian example she set for us all.A Visitation will be held from 6:30 to 7:30 p.m. on Friday, March 7, 2014 at the Old Apostolic Lutheran Church. Services will be held at 11:00 a.m. on Saturday, March 8, 2014 at the Old Apostolic Lutheran Church. Burial will follow in the Sheridan Municipal Cemetery. A Reception will follow the Burial at the Church.Kane Funeral Home has been entrusted with arrangements.