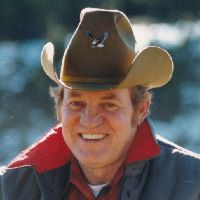 A Christian soldier has been called Home by the Lord. His mission has been completed. Ernest F. Wooley, 78, of Sheridan, passed away on Monday, December 7, 2015, at home from a heart attack.Ernie was born on April 19, 1937, in Denver, CO, to parents Ernest and Annabelle Wooley. He served in the Army stationed in Germany from 1957 to 1959. He married the love of his life, Brenda Stuessy on February 11, 1966. Ernie was a “jack of all trades” which allowed him to be a cowboy, mechanic and carpenter. At the time of his death, he was the owner of Wash Yer Wooley\'s Laundry in Sheridan. They have lived in Colorado, California, Canada, Montana, South Dakota and finally, Sheridan, Wyoming. He enjoyed building houses, horseback riding, fishing, football and playing horseshoes. He also loved to sing gospel and praise songs. He was a member of the Cornerstone Church where he was active in the Men\'s Prayer Group. Ernie wanted to be remembered as a Christian man who happened to own a business he called “The Church of the Open Laundromat” which he considered a mission field. He loved to talk with the people the Lord put in his life.Ernie was preceded in death by his parents, sisters, Fern and Mary, and brothers, Russell and Bob. He is survived by his wife, Brenda, siblings, Donna (Keith) Hagin of Denver, CO, Bud Wooley of Topock, AZ, and Betty Johnson of Albuquerque, NM, and brothers and sisters in law: Colleen Duerst of Denver, CO, Brad (Susan) Duerst of Southlake, TX, Rob (Jane) Stuessy, Cyndy (Dave) Winders and Melaine (Dan) Davidson all of Sheridan and numerous nieces and nephews.A Celebration of Life with Military Honors will be held at 2:00 on Wednesday, December 16, 2015, at the Cornerstone Church with Pastor Tony Forman officiating. A Reception will follow at the church.Memorials to honor Ernie may be made to the Cornerstone Church Building Fund at 4351 Big Horn Ave., Sheridan, WY 82801.Kane Funeral Home has been entrusted with arrangements.