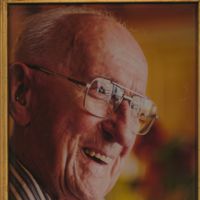 Erwin H. Kubsch, 102, of Sheridan, passed away on Tuesday, August 5, 2014 at his residence. Erwin was born on January 1, 1912 to Matt and Mary (Kliment) Kubsch in Kossuth, WI. He was raised in Manitowoc County, WI and Kellnersville, WI and graduated from Manitowoc High School in Manitowoc, WI. He attended teacher\'s college for two years. Erwin married Virginia Kuehnl in Kellnersville, WI on Nov. 26, 1940.Erwin enjoyed traveling, he could fix anything, restored a steam engine and two cars after his retirement, was meticulous about life, and was co-founder and chairman of the Big Horn Mountain Polka Days. He especially loved Polka dancing with his wife. They danced all over the United States.Erwin was a Life member of both the Elks and Eagles, member of Holy Name Catholic Church and belonged to the Knight\'s of Columbus 4th degree. Erwin was a New Year\'s Baby and grew up on a farm in Manitowoc County, WI. During his early years he became a Country School Teacher teaching all 8 grades. His students were very fortunate to have him as a teacher. During this time he also learned the electrical trade by installing electricity on the farms in Wisconsin. In 1942 he moved his family, Virginia and daughter Donna to Bremerton, WA to work in the Naval Shipyards during WWII. He was an electrician as a civilian for the government. Judy was born in Bremerton. After the war he moved his family to Coulee City, WA to begin a lifetime career as an electrician and eventually a mechanical and electrical supervisor in underground tunnels for 37 years. His third daughter, Mary was born in Coulee City, WA. After Coulee City he moved the family to Grand Coulee Dam where he worked on the second powerhouse of Grand Coulee Dam. Quincy, WA was the next move working on a tunnel and this is where his fourth daughter Patricia came to join us. Santa Barbara, CA was next and birthplace of Kathryn his last daughter. From Santa Barbara his next move was Boston, Masachusetts. After the tunnel project was finished in Boston he moved his family to Casper, WY. Casper to Omaha, NE was the next move. In Omaha he worked for Peter Kiewit and Sons as mechanical and electrical supervisor of all tunnel jobs. From Omaha he worked on tunnel projects all over the United States and Canada. Before he retired Erwin purchased land in Sheridan County and began building a passive solar home. When the home was finished in 1985 Virginia, Kathy, his youngest daughter, and himself moved to Sheridan. Erwin also wrote two books on Solar Heating for your home. During the 30 years he was in Sheridan, he was a very active member of Holy Name Catholic Church and the Elks Club. All of his life he danced his way around many dance floors, some of them famous or a simple country dance. Virginia and Erwin would dance to any kind of music and were very proficient no matter the dance step. Dancing was his foundation for a great life, especially the Polka. He was dancing two months ago. His family is not the only people that will miss him, as well as many friends around the United States and Canada.Erwin was preceded in death by his parents, his wife, three brothers and one sister. He is survived by his daughters; Donna (Robert) Shelley, of Sheridan, WY, Judith (Thomas) Pester, El Paso, TX, Mary (Thomas) Patton, Elkhorn, NE, Patricia Magni of Elkhorn, NE and Kathy Kubsch of Sheridan, WY. Also, his grandchildren; Ronald Shelley of Atlanta, GA, Annette (Brian) Rinaldo Beisher of Sheridan, WY, Todd (Sandy) Shelley of Sheridan, WY, Thomas (Krista) Shelley of Las Vegas, NV, Patrick Shelley of Denver, CO, Jennifer (Shane) Warner of Dallas, TX, Jeffrey (Kandi) Pester of Santa Fe, NM, Michael (Kristie) Haffke, Omaha, NE, Thomas (Geri) Haffke of Council Bluffs, IA, Richard (Nicole) Magni of Yorba Linda, CA and eight great grandchildren.A Visitation will be at 6:00 with a Rosary at 7:00 on Thursday, August 7, 2014 at Kane Funeral Home with Father Ron Stolcis officiating. A Mass of Christian Burial will be at 10:00 on Friday, August 8, 2014 at Holy Name Catholic Church with Father Ron Stolcis officiating with the interment at the Sheridan Elks Memorial Cemetery. A reception will follow at the Elks.Memorials to honor Erwin can be made to the Big Horn Polka Club, George Arzy, 104 W. 4th St. Sheridan, WY 82801 and the Sheridan Dog and Cat Shelter, 84 East Ridge Road, Sheridan, WY.Kane Funeral Home has been entrusted with arrangements.