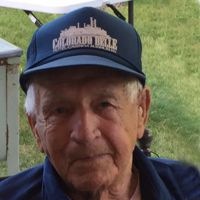 Eugene “Chink” White, 90, of Sheridan, passed away on Wednesday, May 11, 2016, at the Sheridan Manor. He was born on July 12, 1925, in Big Horn, WY to parents Tom and Clara (Hepp) White. After serving in the Army from 1945 – 1947, he married Pokey Janich on March 6, 1953.Gene worked for Peter Keiwit, Padlock Ranch and retired from Big Horn Coal. He was a member of Operating Engineers, UMA, Elks and the American Legion. He enjoyed hunting, fishing and especially spending time with his grandchildren and great grandchildren.Gene was preceded in death by his parents, wife, daughter and two brothers. He is survived by his daughters; Dona White of Sheridan and Buni Ruby (Luke Sherman) of Sheridan, a sister, Janice Stephens of Placentia, CA, his three grandchildren; Jason (Wendi), Joe, Tera (Rich) along with 2 great grandchildren; Kaice and Kinley.Donations to honor Gene may be made to the Sheridan Senior Center Lunch at 211 Smith St., Sheridan, WY 82801.Per his request no services will be held.Kane Funeral Home has been entrusted with arrangements.

Date:
Start Time:
Per his request no services will be held.
Location:
Service VideoService Brochure