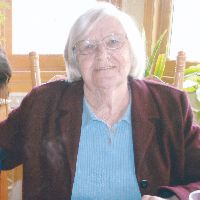 Eva Schneider, 92, of Sheridan, passed away on Saturday, September 24, 2016, at the Green House Living of Sheridan. She was born on February 5, 1924, in Lorsch, Germany, to parents,Georg and Elisabetha (Mayer) Ritzhaupt.She attended school for 12 years and worked in a Cigar Factory until she met Erwin Schneider and were married on April 18, 1943. Her husband was a professional soccer player until he joined the German Army shortly after their marriage. He served under General Rommel in North Africa until his capture by British Forces and subsequent transfer to the U.S. Forces. He was transferred to a POW Camp near Greeley, CO. She was reunited with her husband upon his return to Germany after the war.Eva gave birth to their daughter, Elsie on June 20th, 1949. In December of 1952, she and her family came to the United States on the S.S. America landing at Ellis Island, NY. For some time she and her husband worked on a farm near Greeley, CO, harvesting sugar beets and other crops.In 1954, she and her family moved to Glendale, CA, where she was employed at the Cal-Ray Bakeries Company while her husband worked for the Highway Department. Returning to Boulder, CO, in 1957, Eva worked at the University of Colorado in the laundry facility. After moving to Longmont, CO, in 1977, Eva was employed for many years at the Littletree Plaza Hotel and her husband established his own Concrete Construction company. In 2008, she came to Sheridan, WY, to be near her daughter, Elsie and son-in-law, Dan.Eva loved gardening, cooking, baking (cheesecake was her specialty) and spending time with her beloved German and Polish friends.Eva was preceded in death by her parents, husband, Erwin and brother Emil Ritzhaupt.A Graveside Service will be held on Tuesday, October 11, 2016, at 10:00 am, at the Foothills Garden of Memory Cemetery in Longmont, CO.Kane Funeral Home has been entrusted with arrangements.