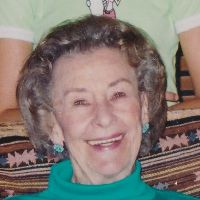 Francelia Helvey Wood was born on May 12, 1922, in Sheridan, Wyoming, to John and Clara Helvey. She peacefully passed through Heaven’s gate on November 9, 2015, at Greenhouse Living of Sheridan, where she had been a resident since May of 2013. Beloved by all who knew her, “Fran”, or “Francie”, as she was often called by friends and family, lived a fulfilling and vivacious life from the very beginning.Francie was a dedicated daughter, sister, loving mother and wife. She spent her life doing what she loved most, ranching, and riding her beloved horses. Fran put her heart and soul into everything she did. She grew up in the “Dirty Thirties”, ranching with her family and living “a simple, but good life.” Eventually her family sold their ranch and moved into Sheridan where she and her brother Thad attended school. Francelia graduated in the spring of 1940. In the fall of that year, she took a train out of Sheridan and headed east to attend Christian College in Columbia, Missouri, where she was not only elected as Student Body President, but was actively involved in a variety of other student clubs. Francie was also an accomplished athlete, most notably, an exceptionally skilled horsewoman, accumulating quite a collection of trophies from many competitions. She earned her Associate’s Degree in Physical Education with honors in 1942.Francie was always a genuine patriot from a young age and she felt it was very important to get involved in the war effort and lend her support any way she could. She trained as a nurse’s aide, sold war bonds, volunteered with the USO to help entertain the troops and worked as a payroll clerk at both the Casper Air Force Base and the Davis Monthan Air Force Base in Tucson, AZ, until the end of WWII. Simultaneously, she trained horses, gave riding lessons and worked at various ranches helping friends and family, always ready to lend a helping hand where it was needed.Fran Wood was a beautiful, passionate, witty, hardworking and talented lady, who loved to dance, enjoy a good party or sit down for a lively game of cards with friends; she made an impression on all who knew her. God Bless her for the joy she brought so many in life, she is already greatly missed by her family and friends. Her ability to lighten up a room and tell a good story will not soon be forgotten. Along with her skills as a horsewoman, Francie was an excellent cook and she could whip out a meal for 50 people as effortlessly as if she were serving only 2-4 people. This skill was particularly noteworthy as there was no grocery store just around the corner and drop in dinner guests was a common practice. She married her husband Gene, on April 2nd, 1947, shortly after he had returned from his tour of duty in the Air Force in the Pacific. They made a life together as hard working ranchers, putting blood, sweat and tears into every task they took on. Francie’s parents and brother Thad preceded her in death and Gene passed away in November, 2001. Francelia is survived by her three children; Phil (Denise)Wood, Marcie Wood and Trudy (Tom) Wood Kittelmann, grandsons CT(Alyssa) Hill, Cooper Kittelmann; granddaughters Chelsea Kittelmann, Lisa Thoreson, and Lauren (Dillon) Ward; great-grandchildren, Brooke, Makenzie and Tyler Hill, & Bodey Ward. Francie also leaves several nieces and nephews as well as a wide circle of friends scattered near and far. In the latter years of her life, she dedicated her time to writing her life story. Putting her razor sharp memory to work, Francie documented details and numerous stories of her life growing up during the depression, as a young woman during WWII, raising a family and running a ranch with her husband Gene and recalling the personal histories of nearly all of the families in the surrounding territory of Northern Wyoming and Southern Montana.  Her book was published in 2007, and was titled “Ol’ Bill & Lots of Horses”.Memorial services are scheduled for Friday, May 27th, 2016, at 1:00 pm at Kane Funeral Home with Reverend Kevin Jones officiating. A reception to follow at the Kalif Shrine on Loucks Street immediately following the memorial service.  Memorials to honor Francelia may be made to the Sheridan Senior Center at 211 Smith Street, Sheridan, WY 82801.Kane Funeral Home has been entrusted with arrangements.