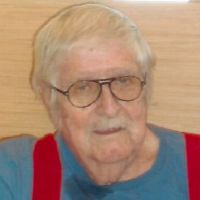 Harold Richard Hayward, 85, of Sheridan, passed away on Saturday, March 8, 2014 at the VA Medical Center.Harold was born on November 29, 1928 in Kenosha, WI, to parents Ora and Electa Alice (Murphy) Hayward. He was one of five children.Harold joined the Air Force and served for 22 years. He enjoyed photography and was interested in air planes. He worked with the FFA in Communications.Harold was preceded in death by his parents, and brother, Donald Hayward. He is survived by his siblings; Marjorie Davey, of Sheridan, WY, Edna Osborn, of Buffalo, WY, and Jack Hayward, of Colorado Springs, CO, along with many nieces and nephews.Memorials to honor Harold may be made the Sheridan Senior Center at 211 Smith St., Sheridan, WY 82801.A Graveside Service for Harold will be held in July with full Military Honors.Kane Funeral Home has been entrusted with arrangements.