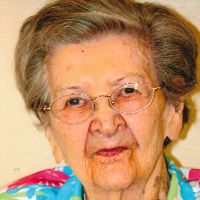 Helen Deines, 95, passed away at Westview Health Center in Sheridan, WY on October 31, 2017. She was born on September 10, 1922 to John and Amelia Blehm in Ft. Collins Colorado. The oldest of three children, Helen lived in the Ft. Collins area most of her life and attended local schools. Grades 1-7 were spent at Rocky Ridge School; she attended Lincoln Junior High and Ft. Collins High School and graduated from Cache La Poudre high school in La Porte, Colorado.Her dream was to become a nurse. She attended Colorado State University for one year and moved on to Saint Joseph nursing school in Denver, Colorado where she fulfilled her dream by becoming a Registered Nurse. She worked at various sites around Ft. Collins including CSU Student Health, Poudre Valley Hospital, and private duty nursing until her retirement.She lived through four years of World War II nervously waiting for her fiancé Victor Deines to return from active duty and was married within days of his safe return in 1945. They remained happily married for 61 years until separated by his death. They had two sons, Stewart of Sheridan, WY and Robert of Boise, IDHomemaking was an important part of her life and, even though she only had sons, made sure they were well trained in those skills. She loved cooking and serving friends and family meals. Helen loved doing a variety of crafts including knitted and crocheted clothing and blankets, and enjoyed making candles.Helen was always very active in her church. She attended Bethlehem Lutheran Church in Ft. Collins until the congregation restarted as Shepherd of the Hills Lutheran Church, where she was active in all aspects involved in making a new mission church a success.She loved the outdoors and spent many exciting weekends camping in the Colorado mountains with her family until an old canvas tent was replaced by a cabin in Red Feather Lakes. Since the cabin was built over many years, she spent many happy hours building, fishing, and creating her flower garden, even though her efforts were frequently eaten by rabbits and chipmonks. After retirement many summer days were spent enjoying the results.At the urging of their children, Helen and Vic moved to Sheridan, WY. She lived at Sugarland Assisted Living Facility for 10 years until sickness forced her to move to Westview.Helen was preceded in death by her parents, sister Marlene (Blehm) Souders, brother Olin Blehm, and her husband Victor Deines. She is survived by her sons Stewart and Robert, grandsons Nathan ,Timothy and Andrew Deines and, granddaughters Victoria Irwin and Megan Deines, and great grandchildren Taylor and Harlie Young and Deklan, Riley, and Marshall Deines.Services will be held at Trinity Lutheran Church in the near future and her ashes will be buried next to her husband at Chapel in the Pines in Redfeather Lakes Colorado at a later time.Kane Funeral Home has been entrusted with arrangements.