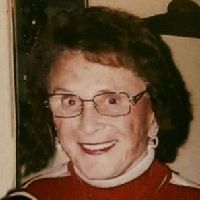 Isabel Matinda Sarnecki Hunter died in her sleep September 13, 2016 at the age of 86.  Isabel was born  December 21, 1929 to Martin and Matilda Sarnecki in Edmonton, Alberta Canada and grew up on a farm near the town of Tawatanaw, Alberta Canada with four siblings, Alice, Luczia, Leonard and Rosemarie.  After graduating high school, Isabel attended and graduated from nursing school in Moose Jaw, Saskatchewan, and then moved to Hawaii to achieve her residency.  While in Hawaii, she met a nurse from Buffalo, Wyoming, who told her about the great wild west and inspired Isabel to move to Buffalo, Wyoming, where she met and married Vernon Hunter.  After living on the family ranch north of Gillette, Isabel and Vernon moved to Reedsburg, Wisconsin, where they purchased and worked a small dairy farm.  Isabel worked at a local hospital while Vernon went to college, and their daughter Elana was born followed by their son Leslie a couple of years later.  When Vernon achieved his teaching degree and decided to pursue a masters, the family moved to Milwaukee, Wisconsin, where Isabel worked as a nurse, Vernon taught school and achieved his masters, and their daughter Elisa was born.  The family moved back to Wyoming, settling in Sheridan where Isabel raised her family, grew wonderful flowers and gardens, and worked at Memorial Hospital.  She was often called late at night or early in the morning to accompany a patient in the ambulance from Sheridan to the ICU facilities in Billings.  Annual Christmas trips were made to Canada to visit relatives.  Isabel and Vernon were members of the Elks for many years.  At any occasion she attended, Isabel was always seen with a camera: she really enjoyed taking pictures, and later worked on film development of black and white photographs.  Isabel loved to dance, and made sure that her children knew how to dance also.  After she retired from nursing, Isabel enjoyed trips to Europe, the Middle East, and China, usually accompanied by her sister Alice, where she took fantastic photographs, framing some as gifts for her family.  Always sharp minded, she loved playing bridge, and would brag about winning the “big pot” at a weekly card game - usually 75¢.  After moving back and forth between Sheridan and Phoenix several times, Isabel decided to finally settle down in Sheridan, where she enjoyed attending local sporting events, playing bridge, and walking her little dog Belle.  Even when in poor health towards the end of her life, Isabel was very proud to have been a nurse, and always had advice for her caretakers, asked for or not.Isabel was preceded in death by her parents and her sister Rosemarie. She is survived by her children; Elana (Roger) Hunter McLean of Gillette, WY, Leslie “Les” (Mary) Hunter of Bismarck, N.D., Elisa Bruce of Sheridan, WY, her siblings; Leonard (Lavina) Sarnecki of Edmonton, Alberta Canada, Alice Dombroski of Calgary, Alberta Canada, Luczia “Lu” Bara of Edmonton, Alberta Canada. Also, grandchildren; Jim Hunter, Kelly (Mike) McMorris, Travis (Jana) Bruce, Arlen Bruce, great grandchildren; Ayden, Lilly and Anson.Services will be held at 10:00 A.M., Friday, September 23, 2016 at Kane Funeral Home with Father Glenn Whewell officiating. Burial will be in Edmonton, Canada.Memorials to honor Isabel can be made to Holy Name Church, 260 E. Loucks, Sheridan, WY 82801.Kane Funeral Home has been entrusted with arrangements.