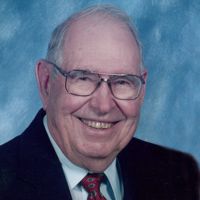 Jack Landon was born on October 19, 1925 to Steve and Florence Landon in Kremlin, OK. He Graduated from Capitol Hill HS, Oklahoma City and from the University of Oklahoma (OU). In both schools, he excelled in their basketball programs. Jack was a four year letterman at OU having won All-Conference for two years. As a continuing starter, he was particularly proud that in 1947 OU was the NCAA finals runner-up team. In 1948, he graduated with a degree in Geology.

Through mutual friends he and Ann Willis met on a blind date. They celebrated marriage on March 26, 1948.

Jack started work on a seismograph crew in Gillette, WY for Kerr-McGee Co. Responding to the government’s request for uranium, in 1952 Kerr-McGee Mining entered into the uranium mining business. Mining in New Mexico, North Dakota, Florida and Wyoming, Jack remained in this field for thirty-two years. There was a special employer-employee relationship within Kerr-McGee, both caring about the welfare and success of the other. Jack always felt a special loyalty to the company. In 1982, Jack retired as Vice-President of Kerr-McGee Development/Minerals Exploration Division.

Following retirement, he and wife Ann chose to move from Oklahoma City to Sheridan to be near children and grandchildren. Happy times were shared camping and fishing in the Bighorn Mountains and at local lakes with family and friends. Jack and Ann helped with their son and daughter-in-law’s greenhouse business during their busy spring season. Jack always bragged about being the customer’s “carry-out boy”. Working in his home garden provided buckets of raspberries and many delectable cantaloupes that he shared with family and friends. Having Okie blood, at the first sign of really cold weather, he and Ann became “Winter Texans”. Tours taken with Elder Hostel were often incorporated with Jack and Ann’s comings and goings. In later years, it was a pleasure for Jack to visit with old friends and relive these active years through journals and pictures.

In lieu of flowers, please donate memorials to honor Jack to Sheridan Manor, attn. Business Office, 1851 Big Horn Ave. for the beautification of the outdoor garden of the Memory Wing.

Services will be held at 10:30 a.m. on Saturday, March 28, 2015, at Kane Funeral Home with Pastor Doug Goodwin officiating. Interment will be in the Sheridan Municipal Cemetery with a Reception to follow in the Kane Reception Hall.