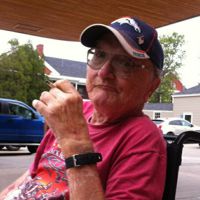 James “Jimmy” Clyde Williams, 67, of Sheridan, passed away on Saturday, February 7, 2015, at the VA Mountain View Living Center.Jimmy was born on April 21, 1947, in Sheridan, WY, to parents Bernard and Charlotte (Kilburn) Williams. He was a graduate in the 1965 class of Sheridan High. He joined the US Army and served in Thailand during the Vietnam War.Jimmy enjoyed playing darts, hunting, fishing and was active in the Eagles Lodge #186, a life member of the VFW, a jokester and an avid Denver Broncos fan.Jimmy was preceded in death by his parents, Bernard and Charlotte, and his brother, Louis Williams. He is survived by his children; Jonathan (Sara) Williams and Charlotte Williams all of Sheridan, his siblings; Loran (Diana) Williams of Twin Oaks, MI, David Williams of Sheridan, WY, Michael (Phyliss) Williams of Olatha, KS, and nine grandchildren and one great granddaughter.A Visitation will be held from 6 -8 pm on Wednesday, February 18, 2015, at Kane Funeral Home. Services will be held at 10:00 am on Thursday, February 19, 2015, at Kane Funeral Home with Chaplain Randy Sawyer officiating. Interment will be in the Sheridan Municipal Cemetery, New Eagles, with Military Honors. A Reception will follow at the Eagles Lodge #186.Kane Funeral Home has been entrusted with arrangements.