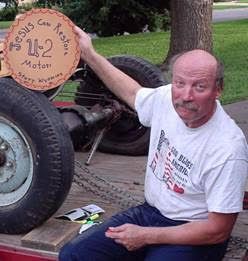 Jim was a beloved son, brother, uncle-figure and friend to many who loved life, and was actively involved in the Family Life Center Church.

He was a graduate of Sheridan High School and the University of Wyoming College of Pharmacy.

After a stint in the US Army, he pursued and earned A Master’s Degree in Hospital Pharmacy. He worked as a local pharmacist before joining the hospital pharmacy staff at Sheridan Memorial Hospital where he served for many years, and recognized for outstanding performance. He did all this while continuing to care for his aging Mother who passed away at age 97. He loved finding and restoring old cars and could often be seen wearing his signature “Jesus Can Restore You Too Motors”  shirts and hat and enjoyed the mountains, snow mobiling, Wyoming Cowboy football, western history, fishing, antiquing and music. He is survived by his sister Patricia in New Jersey, brother Don in Texas, sister-in-law Irene in Pennsylvania, eight nieces and nephews, 13 great-nieces and nephews, four great-great-nieces and nephews and cousin Candace Kovacic-Fleischer .  A graveside service will be held at the Sheridan Municipal Cemetery on October 11th with a memorial service to be held at a later date.