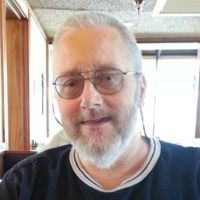 Jay Scott St. Clair, 59, of Sheridan,went to be with the Lord on Sunday, November 30, 2014, at the VA Medical Center. He was born on April 7, 1955, in Billings, MT, to parents Robert and Barbara (Hartley) St. Clair.Jay was an Army Veteran. His favorite activities were having breakfast on Monday mornings with his wife, Vicki (Garrett) St. Clair, and on Tuesdays having breakfast at the Holiday Inn. He enjoyed walking, music, grocery shopping, playing with his cats and spending time with his wife.Jay was preceded in death by his parents, Robert and Barbara and step brother, Robert Todd St. Clair. He is survived by his wife Vicki, his sisters, Pevin (Victor) Munez and their two children, Adrienne and Roy, of Victorville, CA, and Colby St. Clair and her children, Kaulana and Komwela, of Hilo, HI. He is also survived by his two step children, Jonus Madison, and Joseph Madison along with one grandson, Terrell.A Celebration of Life will be held on Tuesday, December 9, 2014, at 10:00 a.m. at Kane Funeral Home with Pastor Scott Orchard officiating with Military Honors. A reception will follow in the Kane Reception Hall.Memorials to honor Jay may be made to the American Diabetes Assocation at 1701 N. Beauregard St., Seattle, WA 98104.Kane Funeral Home has been entrusted with arrangements.