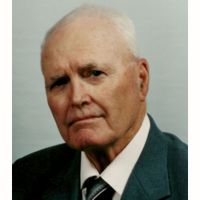 Jerome Thomas Brown, 93, of Sheridan, passed away on Saturday, November 9, 2013 at the Westview Health Care Center.Jerry was born on March 16, 1920 in Sheridan, WY to parents Roy M. and Mary (Murphy) Brown. After school he joined the US Army, served during WWII where he earned the Bronze Star. He married Theresa Arts in Abilene, TX on June 23, 1943.Jerry worked for the VA in maintenance until he retired in 1985. He enjoyed fishing, hunting, camping, reading, wood working, mechanic work and gardening. He was a member of the Elks and Knights of Columbus.Jerry was preceded in death by his parents, two sisters, Mary Ellen and Nora, and a brother, Bill. He is survived by his wife, Theresa, sons, J. Thomas (Virginia) Brown, Jr. of Sheridan, WY and Robert A. (Barbara) Brown, of Broomfield, CO, a brother, Richard (Virginia) Brown, of Billings, MT, eight grandchildren, Scott, Dawn, Michael, Christopher, Joshua, Elizabeth, Jennifer and Mary, six great- grandchildren, Stephanie, Joseph, Xavier, Katherine, Caroline and PiperA Visitation for Jerry will be held at 6:00 p.m. with a Rosary at 7:00 p.m. on Wednesday, November 13, 2013 at Kane Funeral Home. A Mass of the Christian Burial will be held at 10:00 a.m. on Thursday, November 14, 2013 at Holy Name Catholic Church. Interment will be in the Elks Memorial Cemetery with full Military Honors. A reception will follow in the parish hall.Memorial to honor Jerry may be made to the Holy Name School at 121 S. Connor, Sheridan, WY 82801, Holy Name Catholic Church at 260 E. Loucks, Sheridan, WY 82801, Sheridan Senior Center at 211 Smith St., Sheridan, WY 82801 or to the Elks Memorial Cemetery at P.O. Box 624, Sheridan, WY 82801.Kane Funeral Home has been entrusted with arrangements.