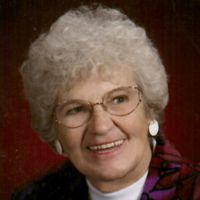 Joan Hutchinson, 77, of Sheridan, passed away on Monday, October 14, 2013, at the Sheridan Memorial Hospital.Joan was born November 21, 1935, in Red Lodge, MT, to Winifred Stone and Joseph Obert. She graduated from Holy Name Catholic School in 1951. Joan married John Hutchinson on May 28th, 1967. She worked for Best Western Sheridan Center for 15 years, Carl\'s IGA for 10 plus years and Walmart for 7 years.Joan was a member of Holy Name Catholic Church. She enjoyed raising her eight children and enjoyed her grandchildren and great-grandchildren and reading and spending time in the mountains.Joan was preceded in death by her parents; her husband, John Hutchinson; a sister, Doris Obert and her sons, Jack Hutchinson and Dan May.She is survived by her sister, Barb Belus and her children, Joseph May, Raymond May, Edward May, Barbra Lassen, Tom Hutchinson and Theresa Hutchinson, all of Sheridan. She is also survived by 18 grand children and 9 great-grandchildren.A Visitation for Joan will be at 6:00 p.m. with a Rosary at 7:00 p.m. on Wednesday, October 16, 2013, at Kane Funeral Home. A Mass of the Christian Burial will be at 10:00 a.m. on Thursday, October 17, 2013, at Holy Name Catholic Church with Father Ron Stolcis officiating. A Reception will follow in the Parish Hall. Inurnment will take place Friday, October 18, 2013, at 10:00 am, at Sheridan Municipal Cemetery.Kane Funeral Home has been entrusted with arrangements.