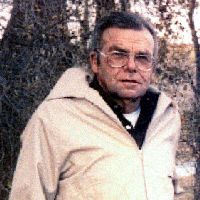 JOHN EDWARD McWILLIAMS, 1924-2015John Edward McWilliams, 91, died at his home on Big Goose where he\'d lived for well over 80 years. He was born in Sheridan on April 8th, 1924 to Henry and Julia McWilliams. His father, Henry, was born in Buffalo to one of the earliest families settling in the area.John attended the one-room Beckton school where all 8 grades were taught by one teacher. He graduated from Sheridan High School and was an outstanding student, a class officer and editor of the school newspaper, among other activities. He then attended the University of Ohio for two years until he was needed at home. John took over the dairy business from his father in 1956 and after retiring from the business, sold hay, grazing and hunting rights.When a young man, he lost his hand in a farming accident. A neighbor who he had never met, Carleton Perry, showed up to finish his summer farming. From then on they shared work and machinery for some years. He said \"I owe Carleton a debt I could never repay.\"John has three children with his first wife, Esther, a teacher, naturalist and photographer. They are Michael (Tina) McWilliams of Stanwood, Washington; Diana Bochenski of Solvang, California and Anthony McWilliams who resides in Basin, Wyoming. John married Mary Ellen Geiss in 1971 and raised her two sons as his own. Mark (Lorrie) Geiss and Monte Geiss live in Sheridan.Despite many long hours of work at home, John always found time to help people and for community service. Through the years he served on the Beckton School Board, and as president of the Sheridan College Board for a number of years through some critical times for the College.He served as president of the Sheridan County Fulmer Public Library Board, and later, on the Library Foundation. He was one of the founders of the Great Books Discussion group, the Sheridan Computer Users Group (with Lionel McEwan and Wayne Schatz) and the Big Goose Planning Association. He was an appointee to the first SAPA (Sheridan Area Planning Association), was Vice Chair of the Sheridan County Farm, Home and Ranch Institute and was the Farm Bureau\'s awardee as Outstanding Young Farmer.According to past County Commissioner, Ken Kerns, John was instrumental in protecting the rights of the Big Goose water users through the years of developing what became the successful Sheridan Area Water Project. \"He started with it, ended with it, and helped resolve all of the issues to everybody\'s advantage,\" according to Kerns.As a self-trained Apple computer expert, John helped dozens of people with their computers and was invaluable in setting up his wife\'s historical web sites, the original Bozeman Trail and Fort Phil Kearny/Bozeman Trail Association sites.John acted in the early days of Sheridan Theater and along with Bill Emery and Ed Freeman, helped produce the first recording of Cris Williamson, who became a nationally-known singer and composer.In 1981, he was one of the two recipients of the Wyoming State Library Trustee Citation Award, nominated by Sheridan Library Director, Alice Meister. His fellow board members wrote that \"During his two terms, the library doubled its space, the Foundation was reactivated, and a long-range plan and community survey were completed.\"Meister wrote that \"John is the epitome of the caring and involved citizen...genuinely a kind, thoughtful, intelligent individual, probably one of the best human beings I will ever know.\"John was preceded in death by his mother, Julia, his father, Henry, and grandson, Steve Geiss. He is survived by Mary Ellen, his wife of 46 years, the couple\'s children, his beloved sister, Marsha Bystrom of Florence, Alabama, and grandsons, Tim and Chris (Charlotte), and great grandchildren Hayden and Colten.Memorial donations are suggested for the Sheridan County Historical Society Museum at P.O. Box 73; the Wyoming Room at the Sheridan County Fulmer Public Library at 335 West Alger; the Sheridan County Senior Citizens Center at 211 Smith Street, or to a charity of the donor\'s choice.At the request of the deceased there will be no viewing, and no public services. Cremation has taken place. Friends are most welcome to stop by and visit the family on John\'s beloved place on Big Goose...perhaps take a walk by the creek or just sit on the porch and reminisce.Kane Funeral Home has been entrusted with arrangements.