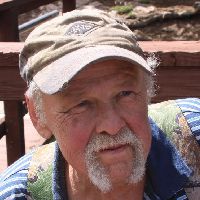 John W. Kolf, 68, resident of Sheridan died at home after a brief illness Saturday, August 15, 2015. John grew up in LaGrange Park, Illinois and resided in Rolling Meadows for many years. He was married to the love of his life, Carol for 47 years. John excelled in his profession and passion for automotive upholstery and restorations and won numerous awards for his work. He had an amazing ability to create anything he set his mind to. John was an avid whitetail hunter and falconer. He will be remembered for his incredible humor and wit. He had an extensive repertoire of jokes that he enjoyed telling. John enjoyed hunting and fishing with his sons, Garrett and Shane.John is survived by his wife Carol (Cooke) and sons Garrett (Heather) and Shane. Celebration of life will be held at a later time.Memorial contributions to honor John can be made to Sheridan Memorial Hospital Foundation Hospice of the Big Horns at P.O. Box 391, Sheridan, WY 82801.Kane Funeral Home has been entrusted with arrangements.