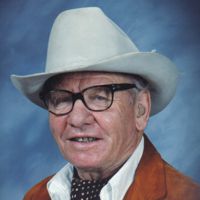 Joseph “Joe” Kuzma, 93, of Sheridan, passed away on Sunday, October 6, 2013 at the VA Hospital.Joe was born on the middle fork of Dutch Creek on September 15, 1920 to parents George and Mary (Washut) Kuzma. He attended Dutch Creek School for the first eight grades. His early work included watering the garden with water carried in buckets from the creek, collecting horse mane and tail hair for sale, fighting the Mormon cricket invasion, and herding sheep on the Frank Stout ranch. The sheep summer range in the Big Horn Mountains on Granite Pass held a huge attraction for Joe. Even as late as this past summer, taking Joe to the mountains meant the final destination was Granite Pass. Once there, after a few moments of reflection, he would be ready to go home. He said for the first 21 years of his life all he knew was sagebrush, tumble weeds and barbwire. All that changed suddenly. While mucking out the stock barn at the Bear Claw ranch above Dayton, Joe heard the news of Pearl Harbor come over the radio. Subsequently, he volunteered for the Army, serving four years, fighting in the Rhineland and Central Europe campaigns, crossing Italy, France, Germany, and Austria. He was attached to an armored field artillery unit which fired over forty thousand rounds of mostly 105mm shells. During this time he was wounded and received the Purple Heart and two Bronze Stars. After being discharged in November of 1945, he decided that he would look for a job other than herding sheep and general ranch work. The Burlington Railroad was hiring firemen and so for the next 38 years Joe worked his way up, at first firing steam engines, and then retiring as an engineer in 1983.Joe led an active retirement life, enjoying his passion for fishing and camping in the mountains. He kept a small but very productive garden and was especially proud of his tomatoes and hot peppers. The fall of the year found him afield harvesting cottontail, pheasant, and grouse. He knew where the wild berries grew, often jumping in his Jeep and running off to a favorite patch, sometimes all the way to Huntley, MT, in this case, for grapes. His deer was always turned into sausage for the long winter. Joe was very fond of mushrooms and rejoiced in those rare years of abundance. Thanksgiving was an important holiday for Joe, for he was truly thankful for the bounty of the earth he so enjoyed. Joe was a member of Holy Name Catholic Church, the American Legion, the Knights of Columbus, and the Elks.Joe had an ear for music and taught himself to play the accordion, which gave him great pleasure up to the end of his life. He also crafted models of steam locomotives and stage coaches and built a number of reclining lawn chairs.Joe made many trips to Poland to visit numerous relatives and friends. He loved the beautiful country of southwestern Poland that was the birthplace of his parents. Joe was very generous to the people of that area, helping to rebuild homes and making a better life possible for many people.Joe was a man of strong faith, attending mass daily. Receiving the Eucharist was the main event of his day.Joe was preceded in death by his parents, his brother, John Kuzma, and his sisters, Helen Kuzma, Rose Kumor, and Mary Stout. He is survived by his niece Blanch Taberna and nephew Robert Stout, and by other cousins and relatives, including Phil and Margaret Klebba and children, whom he regarded as close family.A Visitation for Joe will be at 6:00 p.m. with a Rosary at 7:00 p.m. on Friday, October 11, 2013 at Kane Funeral Home. A Mass of the Christian Burial will be at 10:00 a.m. on Saturday, October 12, 2013 at Holy Name Catholic Church with Father Jim Heiser, Father Ron Stolcis, Father Michael Ehiemere and Father Louis Shea officiating. Interment will be in the Sheridan Municipal Cemetery with Full Military Honors. A Reception will follow in the Parish Hall.Memorials to honor Joe may be made to Holy Name Catholic Church at 260 E. Loucks, Sheridan, WY 82801 and/or to the Sheridan Senior Center at 211 Smith Street, Sheridan, WY 82801.Kane Funeral Home has been entrusted with arrangements.