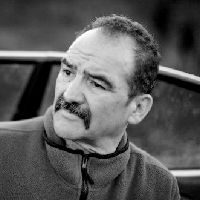 View Service Folder | Click for Video Tribute Juan Jose Serna, 60, of Ranchester, WY, passed away on Tuesday August 18, 2015, at home with his family.Juan was born on September 22, 1954, in Hardin, Montana to Guadalupe and Ninfa Serna. He was the fifth of seven siblings. Juan graduated from Billings Senior High School in Billings, Montana in 1973. He married Lillian Gaona in Billings on July 6, 1974. Juan and Lillian lived in Billings where he worked at Exxon before following in his father and older brother’s footsteps by hiring on with the Burlington Northern Railroad in 1977. Juan retired from the railroad in 2008, and built his own business, Sound By Sound Connection. Juan was integral in supporting the music scene and musicians in Sheridan and Montana. Juan was a self taught sound engineer who enjoyed providing sound systems for music bands, school districts, and for the Sheridan WYO Rodeo. Juan was known far and wide for his generosity, his positive outlook, and his love of family and friends. Every day was a new day with the potential for joy and laughter. A great many young people in the community worked for Juan, including his nephew Robert Alley Jr., who died in 2012, who worked for Juan for a great many years and was beloved by Juan.Juan was preceded in death by his father, Guadalupe Serna Sr., his father-in-law Julio Gaona, and his nephew Robert Alley Jr. He is survived by his wife Lillian, of Ranchester, WY; his mother, Ninfa Serna of Sheridan, WY; his children, Christina Marie Fauth (Jeff), Stevenson, WA; Juan Jose Jr. of Los Angeles, CA; Steven Michael of Sheridan, WY; and granddaughter Olivia Renee Fauth (Christina and Jeff) of Stevenson, WA. He is also survived by his sister, Maricela Feldhaus (Jim) of Columbus, NE; brother Guadalupe Serna Jr. (Laurie) of Euless, TX; sister Delia Serna of Sheridan, WY; sister Alicia Cassell (Ron) of Fort Collins, CO; sister Rita Ash (jon) of Alliance, NE; brother Fernando Serna (Millie) of Parkman, WY. He is also survived by members of the Gaona family, many of whom spent their childhood years in the home of Juan and Lillian: sister-in-law Julie Condelario (Todd) of Casper, WY; brother-in-law Ricardo Gaona of Rancherster, WY; brother-in-law Gavino Gaona (Jennifer) of Sheridan, WY; brother-in-law Oscar Gaona (Alina) of Sheridan, WY; and niece Jazmine Gaona of Scottsdale, AZ. Juan was dearly beloved by 23 nieces and nephews, all of whom knew his love and support and will miss him.Visitation for Juan Jose Serna will be Wednesday, August 26, 2015, from 6:00 pm to 7:00 pm, followed by the Rosary at 7:00 pm at Kane Funeral Home. Funeral liturgy will be on Thursday, August 27, 2015, at 10:00 am at Holy Name Catholic Church with Father James Heiser as Celebrant. Pallbearers will be Juan’s brothers, Guadalupe Serna Jr. and Fernando Serna; nephew Jerry Ash; great-nephew Jordan Alley; brother-in-law Ricardo Gaona, and nephew Justin Feldhaus. Honorary pallbearers are Juan’s brothers-in-law, Jim Feldhaus, Jon Ash, Ron Cassell, David Gaona, Mario Gaona, Gavino Gaona, Oscar Gaona, and godson Matthew Petty. Cremation will take place after the funeral, followed by a private ceremony.Donations in memory of Juan can be made to the Tongue River Valley Community Center, PO Box 792, Ranchester, WY 82839.Kane Funeral Home has been entrusted with arrangements.