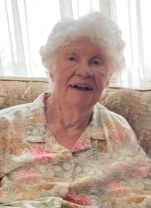 Kathryn Louise (Thompson) Holwell, age 100, died peacefully on June 12, 2022 at Westview Healthcare Center in Sheridan. Kathryn was born on July 20, 1921 to Clarence and Bernice (Sheldon) Thompson at the home of her grandparents, Charlie and Cora Sheldon, 12 miles south of Upton, Wyoming. She was the oldest of seven children but was soon joined by siblings Leone, Ernest, Neil, Truman, Clarice and Stanley. She attended rural school until she moved to Upton to attend high school. She “batched” with other students until graduation as valedictorian of her class in 1939. She then took normal school training and subsequently taught for five years in rural schools in Weston county and in Osage.

She met David Holwell at a dance in Clareton in the summer of 1940. They were married in Sheridan, WY on September 8, 1943 while David was on leave from the Army Air Corp. and remained married for 72 years until David’s death.

They settled on the Holwell Ranch on Skull Creek when David was discharged from the service in 1945 and lived there for 50 years where Kathryn raised and preserved a large garden, lambed ewes and was an integral part of the community being a 4-H leader and an active member of the Skull Creek Ladies Club. They moved to Upton in 1995 and then to Sheridan in 2014. She became an avid golfer at the age of 65, enjoying many hours on the course in Upton. She was also an active member of Eastern Star and the Methodist Church.

The family would like to thank the staff at Cascades of Sugarland Ridge and Westview Healthcare Center for the excellent care provided to Kathryn. At her request, no formal services will be held, but a celebration of life will be planned for a later date.