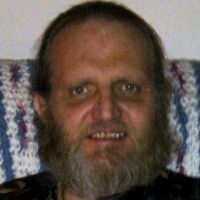 Rev. Kenneth William McDougallJuly 20, 1963 – June 11, 2013Kenneth McDougall passed in his sons home, to go to his Home in Heaven after a life-time of pain from Asthmatic COPD conditions, and a month of knowing he had cancer ravishing his body.Kenneth was born to Walter and Catherine (Thompson) McDougall in Billings, MT on July 20, 1963. Ken graduated from Big Horn High School in 1981. He went to Casper College and graduated with a degree in Computer Science. Being the avid reader he was, often stated he read over 300 books in a year. For 25 years he has taken an interest in studies of the Bible with much history studying into Israel and the tribes, which lead him to believe God wanted him to take a Nasserite vow, which he lived to the fullest. He took home course studies with HARVESTERS CHRISTIAN FELLOWSHIP, becoming an ordained minister of the gospel.Following his heart, as Gods call on his life, and with his wife Tina (Overturf) they moved to Casper for a ministry there. A non-profit organization, a non-denomination they built \"CHRIST HOPE FOR HIS CHILDREN\" home for foster children, worked with the local food bank to distribute food, clothes, etc to the needy. With the word of God burned on his heart he started a mail-ministry and had over 300 places he sent a monthly letter to, \"THE WORD GOD HAD GIVEN HIM\". The past few years he has worked on a book \"Gods Secrets to the Family of God\" completed but, not published yet... his heritage to his children he stated. His God was his #1 priority, \"To live as the good book states\" is so important... he would state.Raised in construction with his father and brothers; he started a \"post frame/pole building business in Casper to supplement the ministry. Later grown into a full time business they formed Cornerstone Pole Buildings, Inc. Over 300 buildings in the Casper, Sheridan, and Kalispell his last year in construction. He then moved to Wyola, MT to help his mother with his father\'s Alzheimer condition.Kenneth loved fly fishing, he spent many hours with his son doing that. A family man, bowling became a passion he wanted them all to learn. Hunting with his dad and brothers gave him pleasure and camping out by the lake with family. Family was most important to him.Kenneth was preceded in death by his McDougall and Thompson grandparents, his daughter through marriage, Crystal Frontella, one grandchild, Kendra, and many aunts and uncles. He is survived by those who mourn their loss: his children; Kenneth Wm. Ryan (Timber) McDougall of Sheridan, WY, Ashley (Brady) Speilman of Sheridan, WY, Kayla Jean McDougall (Rachel) of Sheridan, WY, his beloved adopted son, Tarrence McDougall of Casper, his parents, Walter and Catherine McDougall of Wyola, MT, brother; Walter Scott (Tammy) McDougall of Sheridan, WY and Rick (Juli) McDougall of Banner, WY, his (adopted) sister, Laurie Gable of Gillette, WY, nine grandchildren, many nieces and nephews, cousins and friends. Who will all miss him.Services for Kenneth will be held at 2:00 p.m. on Friday, June 14, 2013 at Kane Funeral Home with Chaplain John Elkins officiating. A Reception will be held after the service at the Four Square Church at 118 W. 5th St., Sheridan, WY.Donations to help pay funeral expenses may be made to Catherine McDougall at P.O. Box 146, Wyola, MT 59089.Online condolences may be written at www.kanefuneral.com.Kane Funeral Home has been entrusted with arrangements.