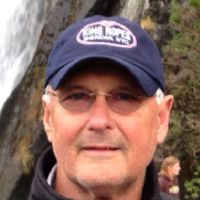 View Service Folder | Click for Video Tribute Larry G. Hurst, 65, a resident of Sheridan, WY for the past fifteen years, and formerly of Edmond, OK, died unexpectedly on Saturday May 31, 2014. He was the husband of Sara Hurst for 29 years. Larry was born in Kanab, UT, on January 9, 1949, born of the late Dorl A. and Hazel Hurst of Sand Springs, OK. He was raised in Sand Springs where he graduated from Charles Page High School in 1967. He attained a general degree from Northeastern Oklahoma A&M in Miami, OK and a Bachelors in Education from the University of Central Oklahoma in Edmond. He played football for Northeastern Oklahoma A&M Golden Norsemen where he was part of their National Championship team. He later attained his J.D. from The University of Oklahoma College of Law and a Masters in Education from The University of Central Oklahoma. Larry coached football as an assistant at Del City High School in Del City, OK (1976-78) and as a Head Coach at Blackwell High School in Blackwell, OK (1978-81). He was a Deputy Attorney General for the State of Oklahoma. Larry then transitioned into education by becoming the Assistant Principal at Edmond Memorial High School in Edmond, OK. In 1998, he moved to Sheridan, WY where he accepted the position as the Principal of Sheridan Junior High school teaching grades 8-9, then became an Assistant Principal at Sheridan High School until he retired in 2013. During his tenure in the Sheridan School District #2, Larry was an assistant varsity football coach and coached freshmen and J.V. football as well. He loved to camp, travel, and spend time with his family, especially watching movies and playing with his grandchildren. Larry was survived by his beloved wife Sara Hurst; two siblings: Betty Joe Spencer-Huneryager and Dorl Edward Hurst; four sons: Chad, Adam, Zack, and Matt Hurst; and four grandchildren: Annika, Owen, Ava, and Allie Hurst.A Memorial Service will be held at 2:00 on Thursday, June 12, 2014, at Junior High Early Building Auditorium with Father David Duprey officiating.Memorials to honor Larry may be made to the Sheridan American Legion Post 7 Baseball Booster Club at 260 Murphy Gulch Rd., Banner, WY 82832.Kane Funeral Home has been entrusted with arrangements.