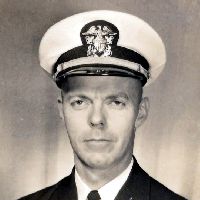 Leslie Calvin Hofto1926 – 2015On the day after he celebrated the independence of this country; a country that he fought so valiantly for during two wars,Leslie “Les” Calvin Hofto, 88, of Sheridan was called away to his next assignment in Heaven. It seems so fitting that this patriotic naval officer would get to live through one more Independence Day. It was as if the love of his life, Patricia \"Patty\" Stancliff, was being given a message from above in appreciation for the patriotic sacrifices they both made for this country.When asked which jet he enjoyed flying the most, this career aviator would say, “The one that was just a little faster than the other guy\'s!” On Sunday, July 5, 2015, Les got to take off on the fastest flight of his life launching from the deck of Sheridan Memorial Hospital. On his personal independence day from mortality, Les earned his wings to fly completely uninhibited by the limits of any natural laws.Les was one of us. Born nearby in Great Falls, MT, on October 9, 1926 to parents Knute and Effie (Bolland) Hofto, wheat farmers from Dutton, MT. Even though his destiny would take him away for many years engaging in adventures all over the world, Les would bring Patty back out West in 1992 to settle here in Sheridan.Les had a burning passion since childhood to become a naval aviator. So after he graduated as the class valedictorian, he enlisted in ROTC and attended Gonzaga University and the University of Washington graduating in 1948. Les began his flying career in AD Skyraiders and was assigned to the carrier air group staff (CVG 7) as LSO. He made a medical deployment before going into combat in the Korea Theater on the attack carrier, USS Bon Homme Richard (CVA 31). He then extended three months to assist the LSO\'s of CVG 15 who were unfamiliar with jets on USS Princeton (CVA 37).Les would meet his wife of 61 years, Patty, through mutual friends at the Officer\'s Club in Rhode Island just before leavingon a navel cruise. While away, this refined and elegant New England beauty never left his thoughts. Consequently, upon returning, he visited Patty every weekend at her parents\' home. When he received new orders, he was determined not to leave without Patty so, on April 12, 1954, in West Hartford, CT, Les married a little part of America, itself, when he took this descendant of Mayflower Pilgrims as his bride. After he and Patty were married, they embarked on his next assignment in Pensacola, FL as a pilot training instructor. They moved many times throughout his career, purposely choosing to live off base in order to become a part of the local community.During his naval career, in addition to combat in the Korean War, Les also served during the Vietnam War. Altogether, he completed over 700 carrier landings on several iconic ships such as the USS Intrepid, USS Enterprise, and USS Philippines Sea. He received many commendations and awards including the Distinguished Flying Cross for heroism or distinguished achievement while on aerial duty.Les was a senior LOS on USS Bennington for the legendary recovery of three carriers\' aircraft with no divert and lousy weather in the North Atlantic during Operation Mariner, the largest international naval exercise ever held. Nine countries, almost fifty different types of ships, and twenty types of aircraft took part. In 1967, Les became the commander of an anti-submarine squadron on Intrepid. It had both fighter and attack capabilities and was based at Naval Air Station Alameda in California. They flew the A4B Skyhawk.Les and Patty never had children but had five golden retrievers whom they loved. They considered the many friends and neighbors they made throughout his naval career and beyond to be a part of their family. Les retired from the Navy at the rank of captain (06) on February 1, 1974. He and Patty settled near her family in West Hartford, CT until they chose to make Sheridan their home twenty-three years ago. Les and Patty loved Sheridan. They spent their time traveling and dining out.Les was preceded in death by his parents and older sister, Ruthie. Survivors include his wife, Patty, and sister, Maxine.A graveside service with military honors will be held at 2:00 PM on Monday, July 20, 2015, in the Sheridan Municipal Cemetery with Chaplin Randy Sawyer officiating. Memorials to honor Les may be made to Sheridan Dog and Cat Shelter at 84 East Ridge Rd., Sheridan, WY 82801. Kane Funeral Home has been entrusted with arrangements.