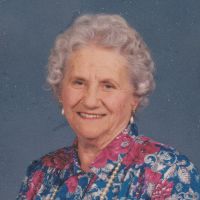 View Service Folder | Click for Video Tribute Madaliene J. Mathews, 98, of Sheridan, passed away on Monday, March 24, 2014 at the Green House Living.Madaliene was born on May 9, 1915 in Pittsburgh, PA. Her parents were Bart and Theresa Favero, who had immigrated to the U.S. from Italy about 1913. Sometimeafter 1915, the family moved to Cambria, WY, where Bart worked in the coal mines. From there the family moved to Acme, WY, where Madaliene grew up. Her years in Acme were idyllic. She attended elementary school in Acme, then went to Sheridan High School. During the Depression she had to stay out of school for over a year to help with her four younger siblings and to reduce the financial strain on the family. She was able to return to school. She graduated with the class of January, 1935. The class description chosen for her was “ A right cute girl if you happen to ask me.” In her later years she loved to reminisce about “The Good Ole Days,” especially her years in Acme, both as a girl growing up and as a young wife.Madaliene would recall “golden friends” she had, like Shizue, Katherine, and Annie, Mary ... Well, the names could easily go on.On July 7, 1935, she married George (Babs) Mathews. They lived in Acme until 1942, when they moved into Sheridan. They had two children, Barbara (Dec. 1937) and George (Mar. 1944). They were married for a little over fifty years. He died in February, 1986.Madaliene\'s highest calling in life was to be a devoted wife and a wonderful mother. She succeeded.Madaliene was preceded in death by her parents, her husband and daughter, two brothers, Al and Mario. She is survived by her son, George and his wife Esther; her sister Terry Spomer; her brother Ben Favero and his wife Nancy; two granddaughters, Roni (Travis) Reed and Vicki Popiel and six great grandsons: Cody Reed, Ryan Deitchler, Wyatt Reed, Landon Reed, Stephen Popiel, and Thomas Popiel.A Vigil Service will be held from 6:00 to 8:00 p.m. with a Rosary at 7:00 on Friday, March 28, 2014 at the Kane Funeral Home with Father Michael Ehiemere officiating. Mass of the Christian Burial will be held at 10:00 a.m. on Saturday, March 29, 2014 at the Holy Name Church. Interment will follow in the Sheridan Municipal Cemetery with Father Jim Heiser officiating. A gathering for family and friends will follow at the Parish Hall.Memorials may be made to Greenhouse Living, 2311 Shirley Cove, Sheridan, WY, 82801.Kane Funeral Home has been entrusted with arrangements.