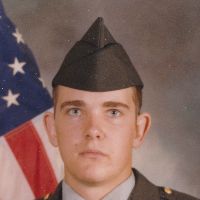 Mark Gregory Taylor passed away April 1, 2017, after a 2 year battle with Cancer. Mark was born February 25, 1964, in Sheridan, Wyoming. He is the son of Tyrus Raymond Taylor and Fon Elizabeth (Helzer) Taylor. Mark graduated from Sheridan High School and also attended Sheridan College after completing 4 years in the US Army serving in the 97th Signal Battalion in Germany.He was married to Robin (Abel) Barber in Sheridan, Wyoming and worked for Agrays as an installer for many years. He had many customers that loved his company as he had the ability to talk to just about anyone about anything.He was a man of many interests including hunting, fishing, long hiking trips in the mountains, scuba diving, rock hunting, and metal detecting. He was extremely knowledgeable about History and loved discussing it.In 2001, Mark joined an online gaming community called \'Sturmgrenadier\'. Mark was one of a handful of founding members that would over the next 16 years grow in size to well over a thousand members. Mark was a much beloved and respected member of this group. Over the course of those 16 years Mark would join his gaming brothers and sisters in participating in many new online games.He is survived by his wife Robin Barber, his brother Kent Taylor and sister Marleen Ketchem, along with Numerous nieces, nephews, great nieces and great nephews that adored him. He is preceded in Death by his Father Tyrus Raymond Taylor, Mother Fon Elizabeth (Helzer) Taylor, and his Nephew Tyrus Kent Taylor.A celebration of Marks life will be held on April 22, 2017, at the Elks lodge in Sheridan at 2:00 PM. family, friends are welcome. Memorials to honor Mark may be made to theMark G. Taylor Memorial FundAt First Interstate Bank – Attention ShannenPO Box 2007Sheridan WY 82801Kane Funeral Home has been entrusted with arrangements.