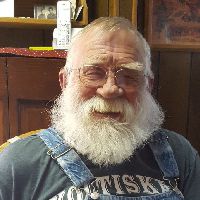 Martin Terry Overturf, 74, of Sheridan, passed away on Monday, February 19, 2018, at his residence.Marty was born on January 16, 1944, to parents Chester and Helen (Felde) Overturf in Sheridan, WY. He married Alice Christenson in Buffalo, WY, on December 30, 1977. He served in the US Army from 1965 to 1967 and received the National Defense Service Medal. Marty enjoyed fishing, hunting, motorcycle riding, football games, camping and was an avid coin and antique collector. He was a trustee for Eagles 4169 since 2010. Most of all, he cherished the time he spent with his family, as they meant the world to him.Marty was preceded in death by his parents, his wife Alice after 39 yrs and 9 mos, brothers, Eugene Overturf, Edward Overturf and daughter, Connie Jean DeBolt. He is survived by his daughters, Darla Kay (Frank) Wetsch of Colorado Springs, CO, Amber Jensen of Sheridan, WY, four grandchildren, Kayla, Brittney, Allisyn, Dawson and one great granddaughter, Haylee.A Graveside Service with Military Honors will be held at 2:00 pm on Friday, February 23, 2018, in the Sheridan Municipal Cemetery with Pastor Phil Wold officiating.Memorials to honor Marty may be made to the Sheridan Dog & Cat Shelter, 84 East Ridge Rd., Sheridan, WY 82801 or the Sheridan Senior Center, 211 Smith St., Sheridan, WY 82801.Kane Funeral Home has been entrusted with arrangements.