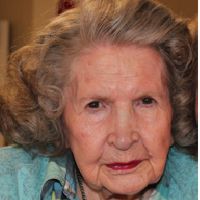 Pauline J. Voss, 95, of Sheridan, passed away on Saturday, December 24, 2016, at the Green House Living of Sheridan with her daughter and son in law by her side. She was born in Shepardsville, IN, on December 2, 1921, to parents Herschel and Rachel (Pruitt) Wallace. She was raised during the depression and often talked of selling tamales on street corners to make money for her family. As a child she was placed in foster care while her mother was treated for TB. She also spent one year hospitalized for the same health issue and care. She had one brother , two sisters all have now passed on. Pauline came to Sheridan Wyoming to work in her father\'s restaurant, Hersch Drive In. She met and married Rollie “Bud” Voss in September of 1940. They remained married for fifty six years until his passing. During their marriage they traveled several different locations (Nevada and Utah) because of Bud\'s work with the Government. They returned to Sheridan to retire in 1977 and be close to family.Pauline will always be known for her beautiful hair and red lips. She would never be caught without her red lipstick on. She was a loner, but loved to talk one on one and was a great listener for people with problems. Raising her own children was one of the biggest parts of her life, but later in life her greatest joy was being able to take care and be part of her two grandchildren who lived here in Sheridan, Nicole Burgess and Tyler Piesik. Her and Bud would constantly be available for them whenever needed. In the last few years of her life she acquired another extended family by living at Brookdale of Sheridan, they listen to her stories and took wonderful care of her needs. She had two other amazing people in her life Carla Ash and Linda Stone-Soukup, who would be there to visit and help when needed. Her constant companion for 12 years was her cat TJ they love each other equally. She was blessed by being at the Green House living in her final days, she passed on in comfort and care.Pauline was preceded in death by her parents, siblings, and husband. She is survived by her daughter Saralee (Joel) Mackey, son, Lance A.Voss, grandchildren, Nicole (Chuck) Burgess, Tyler (Brittany) Piesik , Stormy Medley (Rod) and seven great grandchildren.Memorials to honor Pauline may be made to the Sheridan Dog and Cat Shelter, 84 East Ridge Road, Sheridan, WY 82801 or to the Sheridan Senior Center at 211 Smith Street, Sheridan, WY 82801.Per her request no services will be held.Kane Funeral Home has been entrusted with arrangements.

Date:
Start Time:
Per her request no services will be held.
Location:
Service VideoService Brochure