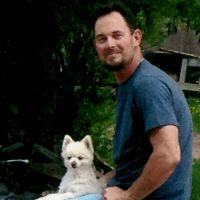 Richard “Rick” A. Walker,Jr., 44, of Sheridan, passed away on Friday, February 6, 2015, at the Sheridan Memorial Hospital.Rick was born in Glasco, MT, on April 6, 1970, to parents Richard A. Walker, Sr., and Susan (Marchant) Wilkinson. He met his wife Marele (Throne) at age 17, they were together for 28 years and later married on September 4, 2004. Together they had their first son, Kody, and four years later they had their second son, Tyler.Rick worked as a Stone Mason for 20 years. He was currently working at Emit Technology. He loved his family and fishing, enjoyed being outdoors in the sun, riding motorcycles in the mountains and spending time at his firepit. Everyone he met became his brother.Rick was preceded in death by his father, Richard. He is survived by his wife, Marele, sons; Kody Walker and Tyler (Amber) Walker, all of Sheridan, his mother, Susan (Kurt) Wilkinson of Basin, WY, grandparents; Kenneth and Gaye Marchant of Cowley, WY, siblings; Dave Walker of Basin, WY, Jesse (Becca) Walker of Wheatland, WY, Marie (J.D.) Foster of Keenesburg, CO, Tim (Crystal) Walker of Wheatland, WY, granddaughter, Morgan Rose Walker and he adored his nieces and nephews.Rick held his head up and smiled through his whole fight to live. He was an amazing warrior, husband, father, brother, son and friend.2 Timothy 4:7-8 I have fought the good fight, I have finished the race, I have kept the faith. Now there is in store for me the crown of righteousness, which the Lord, the righteous Judge, will award to me on that day—and not only to me, but also to all who have longed for his appearing.A Celebration of Life will be held at 2:00 on Wednesday, February 11, 2015, at the Grace Baptist Church.Donations to help with funeral expenses can be made to the Richard A. Walker, Jr. Memorial Fund in the name of Marele Walker at Wells Fargo Bank, 424 N. Main, Sheridan, WY, 82801, please note 1208612133 on check.Kane Funeral Home has been entrusted with arrangements.