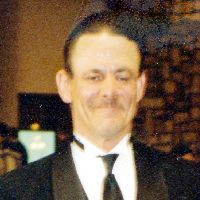 Ricky Oren Johnson, 57, of Sheridan, passed away on Sunday, August 20, 2017, at the Sheridan Memorial Hospital.Rick was born on January 2, 1960 to parents Donald R. and Dixie (Sherman) Johnson in Casper, WY.  He married Sharon Baxter on  December 19, 1977.  He was a member of the Church of God of Prophecy Church in Casper.  He worked as a laborer.Rick enjoyed watching Western movies on T.V., fixing all different kinds of things, always had a smile on his face, really liked helping others, and always had a kind word for everyone.  Most of all, he loved his wife, children and grandchildren. Rick was preceded in death by his parents, father in law Lawrence Baxter, mother in law Mary Baxter, Grandma Ruth, Grandma Elker, and his best friend Chuck Hans.  He is survived by his wife Sharon Johnson of Sheridan, WY, children; Robert (Beth) Johnson of Casper, WY, Mary (Harry) Virden of St. Clairsville, OH, Tabitha Johnson of Sheridan, WY,  and Val Palado, of Casper, WY.   Also, his sisters; Mindy Knight and Christie Johnson both of Denver, CO, seven grandchildren; Brooke, Jonathan, Angel, Nicole, Hannah, Triston, and Jack.Memorials to honor Rick can be made to the Cornerstone Church, 4351 Big Horn Ave., Sheridan, WY 82801.A Celebration of Life for Rick will be at 10:00 am, on Friday, September 1, 2017 at the Cornerstone Church  with Pastor Tony Foreman Officiating with a reception to follow.  Kane Funeral Home has been entrusted with arrangements.