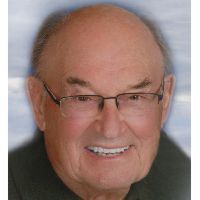 Robert A. Bender, 92, of Sheridan, WY passed away on Saturday, July 26, 2014 at the Sheridan Memorial Hospital. He was born in Montesano, WA on January 17, 1922 to Matt & Mary Bender and attended Montesano High School where he was student body president. He graduated from Washington State University with a BA in Business Administration. While there, he enrolled in the Navy ROTC and after graduating saw action in World War II and later, the Korean War. He rose to the rank of First Lieutenant and last served on the USS Cabildo.In 1947 Bob married Nora Christine Browne of Sheridan, WY who he met in Seattle during the war. After his honorable discharge from the military, Bob worked with various firms before becoming an accountant with Whitcher Machinery Company in Aberdeen, WA. He later moved into sales and, in the early 1960’s started his own company, Mill & Logging Supply. The family, including three children, lived in Montesano for over twenty years before moving to Seattle, WA where Bob took over the Clyde G. Wagner Company; a contract supplier of manufacturing tools for the aerospace industry, primarily Boeing.A passionate golfer and avid fisherman, Bob retired in the 1990’s and began dividing time between Apache Jct., AZ and Sheridan. Nora, his wife of 58 years, passed away in 2005. He was remarried to Barbara (neé Renback) of Silverton, OR in 2008 who was at his side when he died.He was a lifelong member of the Elks Club and active in the Lions Club, American Legion, and was a Third Degree Knight of Columbus. A devout Catholic and parishioner at Holy Name Catholic Church, he was also an active member of parishes in Washington state where he served as an altar boy trainer, CCD instructor, sacristan, lector, and also helped organize fund raising events. In Seattle, he was an active member of the Society of St. Vincent de Paul.Bob was recently preceded in death by his younger siblings, brother Nick and sister Mary Ann Walker. He is survived by his second wife Barbara of Sheridan, sons Rob (Marianne) of Los Angeles, David (Michele) of New York City, Patte Mulcahey (Ted) of Bellevue, and two grandchildren, Lily and Jonathan.Services will be held at Holy Name Church in Sheridan on Thursday July 31st at 10am. In lieu of flowers, donations in his name may be made to Holy Name Catholic School, Sheridan, WY.Kane Funeral Home has been entrusted with arrangements.