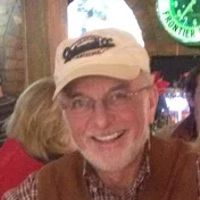 Robert James Axlund passed away peacefully on May 10, 2016 after a lengthy illness. He was born in Billings, MT in 1950. He graduated from Natrona County High School. He went on to Rocky Mountain College where he received a bachelor’s in Business. He returned to Wyoming and joined the Air National Guard in Cheyenne. In 1993 he graduated from the University of Wyoming with a Bachelor’s in Social work, in 1994 he graduated from University of Denver with a Master’s in Social work. After that he worked at Central Wyoming Counseling Center. In 2015 he retired from the Veteran’s Administration in Sheridan where he was a social worker to vets for over 10 years. He was a member of the Drum and Bugle Corps in Sheridan.Robert enjoyed Wyoming’s great outdoors, he was an avid golfer and gardener. He enjoyed camping and fishing and throwing his annual Rodeo party. He is survived by his wife, Ellen; his daughter Stacey (Barr) Zeidler; his son, Ryan Axlund; his grand-daughter, Haleigh Zeidler; his brother, George (Marlene) Axlund; his sister, Dianne Jacobson; along with numerous nieces, nephews, cousins and friends. Services will be held on Friday, May 13th at 10:30 a.m. at St. Patrick’s Catholic Church in Casper. Memorials can be sent to: Wyoming Foundation for Cancer Care, 6501 East Second Street, Casper, WY 82609.Kane Funeral Home has been entrusted with arrangements.