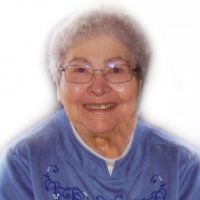 Rose Marie Madia, 83, of Sheridan, passed away on Friday, February 27, 2015, at the Sheridan Memorial Hospital. She was born in Kleenburn, WY on April 21, 1931, to Frank Otterino and Concetta (Amorosa) Madia. The family later moved to Monarch and then to Dietz, where Rosemary\'s brother Chig operated the Country Nite Club. While in Monarch, she co-edited, along with sister Lena and brother Selvy, a newsletter to servicemen from the mines who were serving in World War 2.Rose began working at the Bank of Commerce after graduating from Sheridan High School in 1948. She was the first woman teller in the state. She enjoyed her job there, and she especially enjoyed meeting all the people who came to the bank. After retiring from the bank she was bookkeeper for Holy Name Church. Rose then worked for the Bryan Foundation where she administered student loans.Rose was a member of many organizations in Sheridan. She was a member of the Sheridan Hospital Auxiliary for 65 years. She was active in the local Democratic Party. She was a member of Friends of the Library and the Sheridan County Historical Society. Rose was active in Holy Name Church and was on the Holy Name School Foundation.Rose was proud of her service as a representative on the Wyoming Highway Commission. She helped get the scenic turnouts on I-90 between Buffalo and Sheridan.Rose Marie\'s home was always open to friends and family.She was preceded in death by her parents and brothers and sisters, Kathryn Kobielusz, Dan Madia, Joe (Chig) Madia, Lena Patz, and Selvy (Chic) Madia. She is survived by Amore, Bella, many nieces and nephews, grandnieces and grandnephews, and great-great nieces and nephews.A Visitation will be held at 6:00 with a Rosary at 7:00 on Friday, March 6, 2015, at Kane Funeral Home with Father Ron Stolcis officiating. Mass of the Christian Burial will be held at 11:00 am on Saturday, March 7, 2015, at Holy Name Catholic Church with Father Ron Stolcis officiating. Interment will be in the Elks Memorial Cemetery with a reception following at the parish hall.Memorials to honor Rose may be made to the Sheridan Senior Center at 211 Smith St., Sheridan, WY 82801 or to the Sheridan Dog and Cat Shelter at 84 East Ridge Rd., Sheridan, WY 82801.Kane Funeral Home has been entrusted with arrangements.