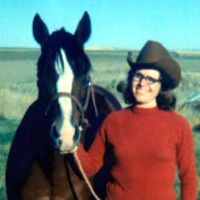 Ruby Bailey Lauridsen, 85, passed away on August 23, 2016 at Sheridan Memorial Hospital in Sheridan, WY. Ruby had a stroke in March and a heart attack took her to be with the Lord after complications from pneumonia. Her suffering is over and she now is at peace in heaven. Her family and friends will greatly miss her love and fiery spirit.Ruby was born in Sidney, MT, on July 9, 1931 to Frederick and Dorothy Fisher. She had four children from her first marriage: Ronald (Mona) Bailey, Diana (Ken) Kling, Martin (Lori) Bailey, and Kevin (Beth) Bailey. In addition to her children, Ruby is survived by eleven grandchildren and numerous great grandchildren. She also is survived by her twin sister, Pearl (Jack) Nickels and her brother, Warren (Ann) Fisher. Her loving husband, Clayton Lauridsen, of 37 years passed away almost a year ago on September 5, 2015.Ruby and Clayton enjoyed working with and riding horses, dancing and playing cards with their friends. Ruby also loved being with her children, visiting with family and friends, and painting.As Ruby and Clayton\'s health diminished, they moved to Sheridan, WY to live by their son and daughter-in-law, Kevin & Beth Bailey, who will dearly miss caring for them.At Ruby\'s directive, cremation has taken place and a celebration of life will be held in the future. Memorials can be sent to the Sheridan Memorial Hospital Foundation, PO Box 391, Sheridan WY, 82801 or Alternative Elder Living, Inc.(Green House Living for Sheridan), 2311 Shirley Cove, Sheridan WY, 82801.Kane Funeral Home has been entrusted with arrangements.