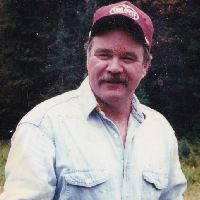 Thomas E. Boggs, 68 of Sheridan passed away peacefully on Wednesday, August 30, 2017 in the Big Horn Mountains. Tom was born February 24, 1949 to parents Meryl Boggs and Desyl Dean in Pringle, South Dakota. Tom was dedicated to his career at BNSF Railroad and retired from the company after 38 years.Tom loved spending time with family and friends. He worked hard and played hard as he enjoyed many great hunting adventures with his boys. He also had a strong fondness for animals, including his many black barn cats, horses, and four legged companion Brazen. He loved to hunt and just last year he fulfilled his dream of a second Big Horn sheep after a long and successful 7 day hunt with Carson. His hobbies were diverse and included a love for riding his Harley Davidson, camping and four-wheeling. He enjoyed the time spent with his children and grandchildren sharing with them his passion for the Big Horn Mountains, guns, pocket knives, John Deere tractors, and Chevy trucks.Tom was preceded in death by his parents, Meryl and Desyl, brothers Donnie and Jimmy, a sister Cora, and his daughter Brenda. Tom is survived by his wife Margaret Kennedy, brother Billy (Sandy) of Belle Fouche, SD, sisters Shirley (Dan) of Custer, SD, Jeannie (Kevin) of Rapid City, SD, sons Jeremy (LeAnn), Kurt (Carrie) and Carson (Audrey) of Sheridan; 7 1/2 grandchildren: Mandi, Taylor, Tommy, Ella, Jack, Henry and Camden; 2 great-grandchildren, and many nieces and nephews.Although Tom will be deeply missed, his life ended with Brazen by his side, in the mountains that he loved. Tom would have been extremely proud of his boys, Jeremy, Kurt and Carson who searched diligently for him, never giving up while organizing themselves and others, to bring Tom home.A celebration of life will be held at the Barn in Big Horn, 228 Johnson St, Big Horn, WY 82833 on Friday, September 22, 2017 at 3pm.In lieu of flowers, donations in Tom\'s name may be made to Sheridan Dog & Cat Shelter, 84 E Ridge Rd, Sheridan WY 82801.