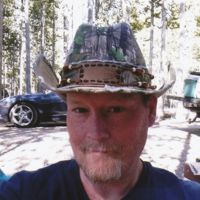 Travis Justin Bolinger, 41, of Sheridan, passed away surrounded by his family on October 7 at Sheridan Memorial Hospital.Justin is the son of Bonnie Yalowizer and Truman Bolinger and was born in Cheyenne, WY on February 26, 1973. He grew up in Sheridan and lived in Gillette working as a Heavy Equipment Operator for AMS. He was a member of the Jericho Baptist Church in Gillette, WY.Justin enjoyed camping, fishing, hunting, anything outdoors, and especially spending time with his boys Colter, Ethan and Aaliyah. He particularly enjoyed his last camping trip with his boys to Shell Canyon. He spent countless hours with Kristy and his family, entertaining them with his collection of movies.Justin was preceded in death by his grandparents. He is survived by his mother Bonnie (Mike) Yalowizer of Ranchester, WY, father Truman (Barbara) Bolinger of Scottsdale, AZ, his children; Colter and Ethan Bolinger, and Aaliyah Eustler, all of Gillette, WY, his siblings; Kiki (Todd) Farrar of Sheridan, WY, Tiffany (Travis) Ackels of Sheridan, WY, Ian Oswald of Stillwater, OK, Megan (Joe) Hobart of Stillwater, OK, Devon (Christy) Oswald of Gillette, WY, Ed Yalowizer of Gillette, WY, Charity (Gary) Hartley of Springfield, VA and numerous nieces and nephews and aunts and uncles. He is also survived by his special friend Kristy Burris.Throughout his two year battle with cancer, Justin touched many lives with his courage and faith in the Lord. He passed away peacefully surrounded by his family safe in the knowledge that he would soon be in heaven, riding his scraper and his Harley and testing out his new wings.A Celebration of Life will be held at 1:00 pm, Saturday, October 11, 2014, at the Jericho Baptist Church, 202 E.Eighth ST. in Gillette, WY, with Pastor Dale Russel officiating. A reception will follow at the church.In lieu of flowers, donations to honor Justin and to assist with the costs of his sons\' education can be made to the Colter and Ethan Benefit Memorial Fund at Wells Fargo Bank, 424 N. Main Street, Sheridan, WY 82801.Kane Funeral Home has been entrusted with arrangements.