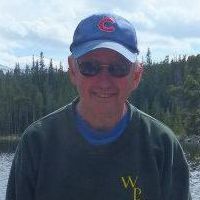 William “Mick” Anderson passed away on February 5, dying of cancer. Mick was a long-time Sheridan resident. After graduating from SHS in 1957, he received his B.A. in English from the University of Wyoming and was forever a Pokes fan. In fact, some of his last words were to check on the Cowboys basketball game score. Mick was a lover of nature and frequently would spend time enjoying the beauty and solace of the Big Horns. After eagerly accepting early retirement from the VA when he was 57, he spent many of his days in the woods (except Sundays in the fall which were always spent watching NFL games). He also had an acute sense of self-reflection and worldly compassion and was always in search of knowledge and in finding his place in the world. He was an incredibly generous man, donating his time and money to many charities, both local and around the globe, and he was very politically acute and active. His causes included human rights, women’s rights, workers’ rights, environmentalism, and poverty alleviation. He was a fighter for the underdog, a trait he partially gained from being a lifetime fan of the Cubbies and from missing many shots while playing noonball at the Y. But most importantly, Mick was known as an ardent tai chi practitioner, learning the art form while in the Peace Corps in Malaysia in the 1970’s. He was preceded in death by his father George Randolph, his mother Josephine, his step-mother Gwen, and his golden retriever Vivace. He leaves behind his daughter Shannon Rose in Sheridan, his son David Randolph, daughter-in-law Jasmine, and grandchildren Solon, Quince, and Nigella in Eliot, Maine, and his godson Campbell in Kuching, Sarawak. Mick also leaves behind a legacy of Irish gumption, love, laughter, and community as he touched the lives of many over his 76 years. In lieu of flowers or gifts, donations can be made to Powder River Basin Resource Council, 934 N. Main St., the nonprofit his daughter works for that valiantly protects the Wyoming Mick so loved, or the Sheridan Senior Center, 211 Smith St., where he spent countless hours eating, talking, and playing bingo over the years. The family encourages you to attend the next Senior Players performance! All are welcome to attend Mick’s memorial celebration on February 21st at 4 p.m. in the Wyoming Room at the Sheridan Inn. Kane Funeral Home has been entrusted with arrangements.